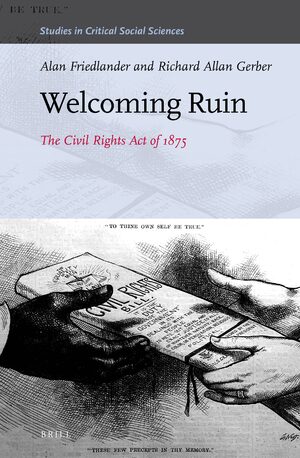 Authors: Alan Friedlander and Richard Allan Gerber
The Civil Rights Act of 1875, enacted March 1, 1875, banned racial discrimination in public accommodations – hotels, public conveyances and places of public amusement. In 1883 the U.S. Supreme Court declared the law unconstitutional, ushering in generations of segregation until 1964. This first full-length study of the Act covers the years of debates in Congress and some forty state studies of the midterm elections of 1874 in which many supporting Republicans lost their seats. They returned to pass the Act in the short session of Congress. This book utilizes an army of primary sources from unpublished manuscripts, rare newspaper accounts, memoir materials and official documents to demonstrate that Republicans were motivated primarily by an ideology that civil equality would produce social order in the defeated southern states.
E-Book (PDF)

€215.00$258.00
​
Add to Cart
Alan Friedlander, Ph.D., University of California, Berkeley (1982), is Professor Emeritus in History at Southern Connecticut State University. He is the author of Processus Bernardi Delitiosi: The Trial of Fr. Bernard Délicieux (American Philosophical Society, 1996), and Hammer of the Inquisitors: Brother Bernard Délicieux and the Struggle Against the Inquisition in Fourteenth-Century France (Brill, 2000).

Richard Allan Gerber, Ph.D., University of Michigan (1967), is Professor Emeritus in History at Southern Connecticut State University, and Adjunct Professor in History at Charter Oak State College. He is the author of The System: The American Constitution in Historical Perspective (Cengage Learning, 2009) and Revolution and Union: The American Dilemma 1763-1877 (Cengage Learning, 2008). He has received a Scholarship award from the Organization of American Historians and the Teaching Excellence award from Lehman College (CUNY).
Acknowledgements
List of Illustrations and Maps

2 A Muster of Moths: The Forty-Third Congress of the United States

3 Charge at New Market Heights: Debate in the House of Representatives

5 The Deadest Corpse: No Exit in the House

Scholars of Reconstruction. Persons interested in civil rights, race relations, or in American political or constitutional history. Perfect for libraries and graduate students.