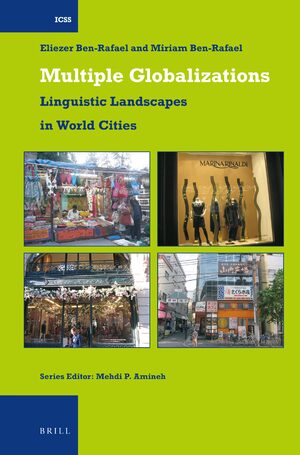 Series:  International Comparative Social Studies, Volume: 39
Authors: Eliezer Ben-Rafael and Miriam Ben-Rafael
This work studies aspects of the symbolic construction of public spaces by means of linguistic resources (i.e. linguistic landscapes or LLs) in a number of world-cities. The sociology of language leads us to this field and to study the intermingling impacts of globalization, the national principle and multiculturalism – each one conveying its own distinct linguistic markers: international codes, national languages and ethnic vernaculars. Eliezer and Miriam Ben-Rafael study the configurations of these influences, which they conceptualize as multiple globalization, in the LLs of downtowns, residential quarters, and marginal neighborhoods of a number of world-cities. They ask how far worldwide codes of communication gain preeminence, national languages are marginalized and ethnic vernaculars impactful. They conclude by suggesting a paradigm of multiple globalizations.
E-Book (PDF)

€135.00$163.00
​
Add to Cart
Eliezer Ben-Rafael, Ph.D. (1974), Hebrew University of Jerusalem, is Professor Emeritus of Sociology at the Tel-Aviv University. He has published and edited many books on Globalization, the Israeli society, identity and language, including Handbook of Israel: Major Debates (2 vols) (De Gruyter, 2016). Miriam Ben-Rafael, Ph.D. (1998), Tel-Aviv University, is Independent Researcher in sociolinguistics. She has published in the area of bilingualism and English penetration of French, including, with Eliezer Ben-Rafael, Sociologie et Sociolinguistique des Francophonies Israéliennes (Peter Lang, 2013).
",,, the book is valuable for providing an overarching framework of societal influences upon the LL of world-cities. Scholars will also benefit immensely from the authors' summaries of a wealth of sociological theory bearing upon modernity, globalisation, multiculturalism and transnational diasporas, and nationhood." - Robert A. Troyer, Western Oregon University, in: Journal of Multilingual and Multicultural Development
Preface
List of Figures, Illustrations and Tables
Abbreviations

11 General Conclusions
1 A sociology of Linguistic Landscape
2 From Modernity to Multiple Modernities
3 Globalization Instead of Modernity?
4 Multiculturalism and Transnational Diasporas
5 The Pertinence of the Nation
6 Multiple Globalizations

All interested in world-cities as foci of globalization, multiculturalism and the authority of the State. From these perspectives, this book is addressed to those interested in multilingual linguistic landscapes.