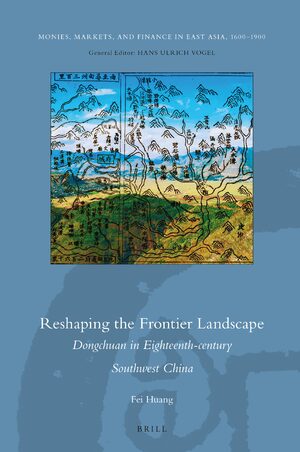 Author: Fei HUANG
In Reshaping the Frontier Landscape: Dongchuan in Eighteenth-century Southwest China, Fei HUANG examines the process of reshaping the landscape of Dongchuan, a remote frontier city in Southwest China in the eighteenth century. Rich copper deposits transformed Dongchuan into one of the key outposts of the Qing dynasty, a nexus of encounters between various groups competing for power and space. The frontier landscape bears silent witness to the changes in its people’s daily lives and in their memories and imaginations. The literati, officials, itinerant merchants, commoners and the indigenous people who lived there shaped and reshaped the local landscape by their physical efforts and cultural representations. This book demonstrates how multiple landscape experiences developed among various people in dependencies, conflicts and negotiations in the imperial frontier.


Introduction: Landscape and the Imperial Frontier
Dongchuan and Northeastern Yunnan
A Landscape Studies Approach
Landscape in the Empire’s Frontier
The Sources
Procedure

2 Valley and Mountain
Moving from the Mountains into the Bazi
1700–1730s War: Completing the Bazi
Spatial Network of the Copper Business
Newcomers, Indigenous People and Landscape Transformation
Conclusion

3 The Walled City
The Indigenous Strongholds on the Huize Bazi
Building the Stone-Walled City
Top-Down or Bottom-Up?
The Planning of an Ideal Civilized Walled City
Conclusion

5 Zhenwu Shrine and Dragon Pool
The Mountain, the Temple and the Shrine
Replacing the Dragon Cult
Praying, Entertaining and Remembering
Conclusion

All interested in Chinese history, particularly the Qing dynasty, plus anyone concerned with landscape studies in general, or urban and frontier studies of China in particular, will find this book useful.