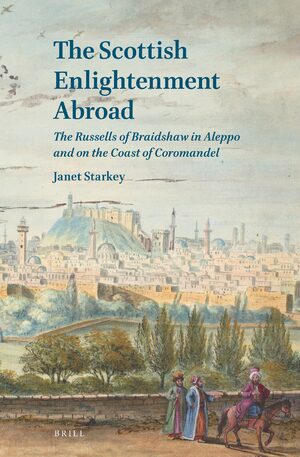 Author: Janet Starkey
In The Scottish Enlightenment Abroad, Janet Starkey examines the lives and works of Scots working in the mid eighteenth century with the Levant Company in Aleppo, then within the Ottoman Empire; and those working with the East India Company in India, especially in the fields of natural history, medicine, ethnography and the collection of Arabic and Persian manuscripts. The focus is on brothers from Edinburgh: Alexander Russell MD FRS, Patrick Russell MD FRS, Claud Russell and William Russell FRS.

By examining a wide range of modern interpretations, Starkey argues that the Scottish Enlightenment was not just a philosophical discourse but a multi-faceted cultural revolution that owed its vibrancy to ties of kinship, and to strong commercial and intellectual links with Europe and further abroad.

€129.00$149.00
​
Add to Cart
Janet Starkey MA (Hons), MPhil, PhD, retired lecturer from Durham University. A founder member of the Association for the Study of Travel in Egypt and the Near East (ASTENE), she has published many edited volumes and articles on the Middle East.
"The Scottish Enlightenment Abroad provides a scholarly, remarkably wideranging and thorough guide to the intellectual ferment of the eighteenth century and to the achievements of Alexander and Patrick Russell as physicians, natural historians, orientalists, collectors of Arabic manuscripts and recorders of scientific and social phenomena." Robert Irwin in Times Literary Supplement 26 April 2019. "I learned a great deal about this intriguing family and hope to read at least one if not both editions of The Natural History of Aleppo at some point. The book also made me think more broadly about the Scottish Enlightenment beyond the mayor players - the Hutchesons, Humes, Smiths and so on..." Arby Ted Siraki in The Newsletter of the Eighteenth-Century Scottish Studies Society, Spring 2019.
All interested in the Scottish Enlightenment, the lives of Scots in the Ottoman Empire and in India, and in medicine, natural history, ethnography and Arabic manuscripts in the eighteenth century.