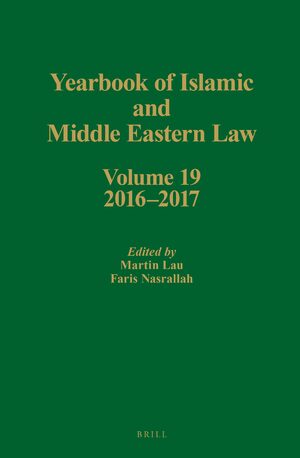 Series:  Yearbook of Islamic and Middle Eastern Law, Volume: 19
Editors: Martin Lau and Faris Nasrallah
The Yearbook of Islamic and Middle Eastern Law (YIMEL) is the leading English language journal covering contemporary Islamic laws and laws of the Middle East. Practitioners and academics dealing with the Middle East can turn to YIMEL for an instant source of information on the developments in the Middle East region and wider Muslim world. YIMEL covers Islamic and non-Islamic legal subjects, including the laws themselves, of some twenty Arab and other Islamic countries. Focusing on YIMEL's role in publishing and disseminating ground-breaking and novel research on Islamic law, Volume 19 includes a Special Edition on the theme of Islamic Law and Empire consisting of a dedicated Preface and articles in Part I, as well as other contributions on legal developments in the Middle East and South Asia, important judgements and book reviews, assembled in Part II.

The publication's practical features include: - articles on current topics, - the text of a selection of important case judgments, - book reviews. Please click here for the online version including the abstracts of the articles of The Yearbook of Islamic and Middle Eastern Law.
Hardback

€335.00$386.00
Hardback
Add to Cart
Martin Lau is the Dean and Professor of Law at the Shaikh Ahmad Hassan School of Law of LUMS in Lahore, Pakistan, on leave from the Law School of the School of Oriental and African Studies (SOAS) until 2018. As a Barrister at Essex Court Chambers, Dr. Lau regularly advises on South Asian, Middle Eastern and Islamic Law.

Faris Nasrallah is an international arbitration lawyer and Arab laws specialist. Having obtained an LLB from SOAS and a Masters in Law from the University of Cambridge, he qualified as a Solicitor in England & Wales (2012). In 2018 Faris was a Visiting Scholar at the Max Planck Institute in Germany.

Where Did the Ākhūnds Go? Islamic Legal Experts and the Transformation of the Socio-Legal Order in the Russian Empire
Rozaliya Garipova

‘I Picked these Flowers of Knowledge for You’: Jesuit Rules of Statecraft for the Emperor of Mughal India
Uroš Zver

Law and Coloniality of Empire: Colonial Encounter and Normative Orderings in the Indian Sub-Continent
Raza Saeed

Co-existence of Sharīʿa and the Modern State: A Historical Perspective from South Asia
Muhammad Zubair Abbasi

Modern Islamic International Law between Accommodation and Resistance: The Case of Israel and BDS
Mohammad Fadel

Dealing with Personal and Non-Litigious Matters of Non-Muslim Iranians under the Iranian Legal System
M.A. Ansaripour

Article 257 of the UAE Penal Code: Inter-jurisdictional Conflict and the Battleground of Arbitration
Faris Nasrallah

Zulfiqar Ahmed Bhutta and 15 Others vs. Federation of Pakistan through Secretary Minister of Law, Justice and Parliamentary Affairs and Others