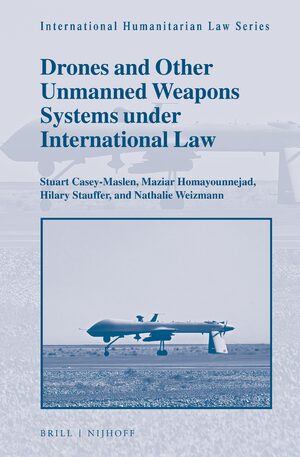 Drones and Other Unmanned Weapons Systems under International Law

Authors: Stuart Casey-Maslen, Maziar Homayounnejad, Hilary Stauffer and Nathalie Weizmann
Drone strikes have become a key feature of counterterrorism operations in an increasing number of countries. This work explores the different domestic and international legal regimes that govern the manufacture, transfer, and use of armed drones. Chapters assess the legality of armed drones under jus ad bellum, the law of armed conflict, the law of law enforcement, international human rights law, international criminal law and domestic civil and criminal law. The book also discusses the application of law to fully autonomous weapons systems where computer algorithms decide who or what to target and when to fire.
E-Book (PDF)

Maziar Homayounnejad is a PhD student at the Dickson Poon School of Law at King’s College London, where he has primary research interests in the law of armed conflict, particularly on issues of new weapon systems and targeting law.

Hilary Stauffer is an international lawyer who serves as Special Assistant to the Deputy Director of the Coordination and Response Division at the United Nations Office for the Coordination of Humanitarian Affairs (OCHA) in New York. She was previously the Deputy Director of Reprieve’s human rights and counterterrorism team in the United Kingdom, covering the issues of detention at Guantanamo Bay and the use of armed drones. She has a BA in International Affairs and a JD with a concentration in International Law.

Nathalie Weizmann is Senior Legal Officer at OCHA in New York. Prior to that, she was Senior Director of the Counterterrorism, Armed Conflict and Human Rights Project at Columbia Law School’s Human Rights Institute, also in New York. For seven years, she was a legal adviser with the International Committee of the Red Cross, both at Geneva headquarters and in the field. She is a graduate of McGill University’s Faculty of Law and Geneva’s Graduate Institute for International and Development Studies.