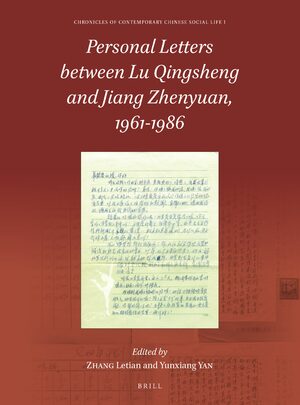 Editors: Letian Zhang and Yunxiang Yan
This rare unusual collection contains a total of 774 letters, most of which were written by a couple, Mr. Lu and Ms. Jiang, who lived apart for more than fifteen years between 1961 and 1986 and relied mainly on letter-writing to communicate. They passionately revealed romantic love and conjugal compassion to each other; they discussed mundane details of everyday family life including management of the household economy, efforts of interacting with in-laws, relatives, and friends, learning course of raising children, and strategies of coping with financial hardship. They also sincerely engaged each other in a soul-searching process of making themselves into socialist subjects and participating in various political campaigns.

The content of these letters is as rich and complicated as the flow of life itself in which the personal, economic and political are intermingled together. The degree of sincerity and honesty in these letters is greater than that in many other kinds of historical data because the authors are not writing for public consumption. This rare collection of personal letters presents not only a huge amount of original and disaggregated data but also constitutes an oral history of social life in China that is unintentionally being recorded by the authors.
E-Book

€217.00$260.00
​
Add to Cart
Zhang Letian is Professor of Sociology and the founding director of the Center for Data and Research on Contemporary Social Life, the Development Institute at Fudan University. He is one of the pioneer Chinese scholars researching rural social life during the collectivization period and best known for his monograph on the rise and fall of the People’s Commune system.

Yunxiang Yan, Ph.D. (1993, Harvard), is Professor of Anthropology at University of California, Los Angeles. He has published three monographs, respectively, on gift-giving and social networks, transformation of private life, and individualization of society in China.

Important for library collection and all individuals who are interested in the making of socialist subjectivity, impact of political changes on individuals, new patterns of romantic love, marriage and family life, and the rise and fall of communist ideology and practice among ordinary people during the radical Mao era and the 1980s.