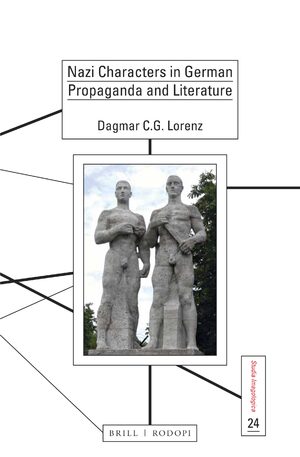 Stereotypical characters that promoted the Nazi worldview were repurposed by antifascist authors in Weimar Germany, argues Dagmar C.G. Lorenz. This is the first book to trace Nazi characters through the German and Austrian literature. Until the defeat of the Third Reich, pro-Nazi literature was widely distributed. However, after the war, Nazi publications were suppressed or even banned, and new writers began to dominate the market alongside exile and resistance authors. The fact that Nazi figures remained consistent suggests that, rather than representing real people, they functioned as ideological signifiers. Recent literature and films set in the Nazi era show that “the Nazis”, ambiguous characters with a sinister appeal, live on as an established trope in the cultural imagination.
E-Book (PDF)

€88.00$106.00
​
Add to Cart
Dagmar C. G. Lorenz, Ph.D. (1974), Cincinnati, is Professor Emerita in German, University of Illinois-Chicago. She has published monographs, editions, and articles in Austrian and German Studies, including Keepers of the Motherland: German Texts by Jewish Women Writers (1997).
"Lorenz’s critical powers are on display in her social analysis and diagnoses of characters in German works published from 1920 to 1950." - R. C. Conrad, University of Dayton, US, in: CHOICE, Vol. 56 No. 5
Acknowledgments
Introduction

Scholars and students of twentieth century German and Austrian culture and Nazi propaganda and ideology; antifascist literature , the production and reproduction of Nazi stereotypes, and gendered Nazi characters.