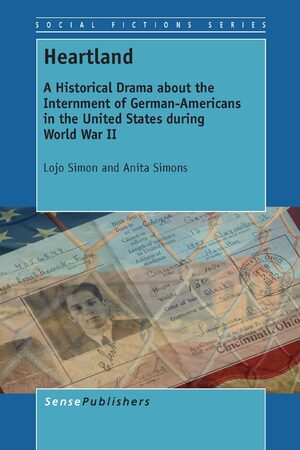 Authors: Lojo Simon and Anita Simons
" If you are a teacher, there is much you can draw on. Heartland itself can be used in classrooms from high school on up. It is fairly short, and reads easily… I believe this is a piece of U. S. history that all of us should know. To me, it demonstrates that none of us is safe from xenophobia, but also that our collective memory of imprisoning U. S. citizens continues to be eradicated, even when it’s part of our own family stories. Perhaps if we knew our history better, we would be less likely to repeat it." — Christine Sleeter, Professor Emerita, California State University Monterey [See the full review at http://christinesleeter.org/german-american-internment-in-the-u-s-heartland/]

During World War II, the US government confined thousands of Japanese-, German- and Italian-Americans to isolated, fenced and guarded relocation centers known as internment camps. At the same time, it shipped foreign Prisoners of War captured overseas to the US for imprisonment.
Heartland reflects on the intersection between these two historic events through the story of a German-born widow and her family who take in two German Prisoners of War to work their family farm. But the German-American family and the POWs bond too well for the townspeople to accept, and the widow is arrested, interned and eventually suffers a breakdown, which tears her family apart.
Based on true stories, Heartland illustrates what can happen when fear and prejudice pit neighbor against neighbor in times of war. A dramatic tale that grants insights into American history, Heartland is a winner of the Dayton Playhouse FutureFest and a runner-up for the Kennedy Center American College Theatre Festival David Mark Cohen National Playwriting Award.

"“ The story is shocking; for me it was revelatory,” wrote theatre critic Pat Launer. “Deporting our own citizens? Who knew? But the play, while conveying historical information, is not in the slightest didactic. It’s a family story, a tale of survival and acquiescence, of racism, of neighbor against neighbor. Not a pretty picture ….” [..] While it may be read for pleasure, Heartland also is a useful tool for exposing students to important lessons in history, politics, economics, sociology, psychology, women’s studies and other academic disciplines. " - NOMINATED: 2015 Book Award - Midwest Popular Culture Association/Midwest American Culture Association
E-Book (PDF)

€25.00$28.00
​
Add to Cart
Lojo Simon is a playwright, dramaturg and journalist. Her play, Adoration of Dora, about surrealist photographer Dora Maar, won the David Mark Cohen National Playwriting Award given by the Kennedy Center American College Theatre Festival and the Association for Theatre in Higher Education. She holds an MFA in Theatre from University of Idaho.
Anita Yellin Simons is a political activist and playwright who combines both her love of history and activism in her many award-winning plays. From her first play Goodbye Memories about Anne Frank before going into hiding to a later play This We’ll Defend about female rape in the military, Simons presents thought-provoking theater with humor and pathos.
Educational Researchers and their students.