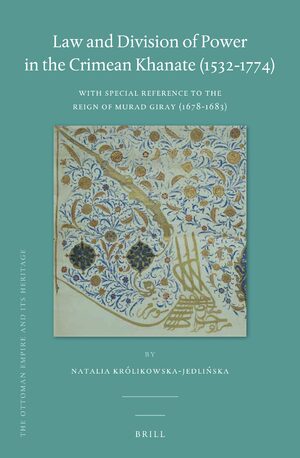 Author: Natalia Królikowska-Jedlińska
The Crimean Khanate was often treated as a semi-nomadic, watered-down version of the Golden Horde, or yet another vassal state of the Ottoman Empire. This book revises these views by exploring the Khanate’s political and legal systems, which combined well organized and well developed institutions, which were rooted in different traditions (Golden Horde, Islamic and Ottoman). Drawing on a wide range of sources, including the Crimean court registers from the reign of Murad Giray (1678-1683), the book examines the role of the khan, members of his council and other officials in the Crimean political and judicial systems as well as the practice of the Crimean sharia court during the reign of Murad Giray.
E-Book (PDF)

€115.00$138.00
​
Add to Cart
Natalia Królikowska-Jedlińska, Ph.D. (2010), University of Warsaw, is Assistant Professor at that university. She has published articles on the Crimean Khanate and the Northern Caucasus in the Early Modern Period.
Preface
The Chronological Scope of the Research
Outline of the Book
Acknowledgments
List of Illustrations
List of Abbreviations
Note on Place Names, Proper Names, and Transliteration
Concordance of Frequently Mentioned Place Names
Glossary

2 The Household, Deputies, and the Council of the Khan
1 The Khan’s Household
2 The Kalga
3 The Nuraddin and His Officials
4 The Khan’s Council

5 Law and Its Practice in the Khanate’s Sharia Courts
1 The Law Applied in the Crimean Courts
2 Litigants of the Sharia Courts: A Basic Statistical Analysis

All interested in the history of the Black Sea Region and the Ottoman Empire as well as researchers on Islamic Law and the Early Modern Eastern Europe.