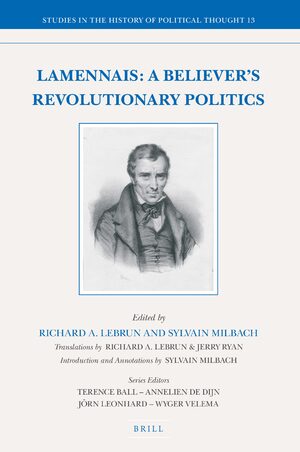 Series:  Studies in the History of Political Thought, Volume: 13
Author: Hughes Félicité Robert de Lammenais
Editors: Sylvain Milbach and Richard Lebrun
Lamennais: A Believer’s Revolutionary Politics, edited by Richard A Lebrun, offers English translations (by Lebrun and Jerry Ryan) of the most influential and controversial writings of Félicité de Lamennais, a French priest who began his career as a Traditionalist, became the founder of Liberal Catholicism in the early 1830s, and then left the Church after his ideas were condemned by Rome. Sylvain Milbach’s comprehensive Introduction and Annotations place these writings in the context of the author’s intellectual history and the political, religious, and intellectual situation in France in the first half of the 19th century.

Jerry Ryan studied at Boston College and The Catholic University of America and did his post-graduate studies at the Dominican Theological Institute, Toulouse, France. He has published articles in American and French Catholic periodicals and translated for academic presses.

Selected Articles Published in L’Avenir 16 November 1831
- First Article, Untitled
- On the Separation of Church and State
- L’Avenir’s Doctrines
- On the Position of the French Church
- Declaration Presented to the Holy See, by the Editors of L’Avenir
- On the Republic
- On the Interests and Duties of Catholics
- On Freedom
- On the Future of Society
- What Catholicism Will be in the New Society
- On Religious Freedom
- Act of Union, by the Editors of L’Avenir
- Farewell from M. de Lamennais

Index
All interested in 19th-century French intellectual and political history, and the history of Catholicism. This volume will be a useful tool for scholars, educated laymen, and undergraduate and post-graduate students.