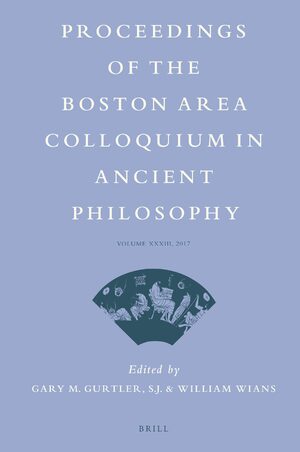 Editors: Gary Gurtler and William Wians
This volume, the thirty-third year of published proceedings, contains four papers and commentaries presented to the Boston Area Colloquium in Ancient Philosophy during academic year 2016-17. Paper topics include: a liar’s paradox in Parmenides’ Poem centered on the role of the goddess; Aristotelian logic as rooted in natural things, not mental entities, in Posterior Analytics; authorial freedom in Aristotle’s Poetics rooted in the ‘likely and necessary’; Callicles’ attack on philosophy as taking away one’s substance and Socrates’ concurrence to preserve its pursuit of truth and the good in Plato’s Gorgias. The comments do their work in challenging some of these claims and supporting others.

€127.00$147.00
Add to Cart
Gary M. Gurtler, S.J., is Associate Professor of Philosophy at Boston College. He has published on ancient philosophy, including 2 books, most recently Ennead IV.4.30-45, IV.5, Translation and Commentary (2015), and co-edited Ancient and Medieval Concepts of Friendship (2014). William Wians is Professor of Philosophy at Merrimack College. He has edited eleven previous volumes of BACAP proceedings. His collection Logos and Muthos: Philosophical Essays in Greek Literature was published in 2009. A second volume is in preparation.
All those interested in recent scholarship within different traditions of interpretation in ancient philosophy and classics, including scholars and graduate students.