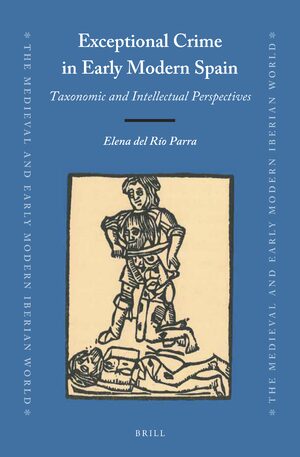 Author: Elena del Río Parra
Exceptional Crime in Early Modern Spain accounts for the representation of violent and complex murders, analysing the role of the criminal, its portrayal through rhetorical devices, and its cultural and aesthetic impact.
Proteic traits allow for an understanding of how crime is constructed within the parameters of exception, borrowing from pre-existent forms while devising new patterns and categories such as criminography, the “star killer”, the staging of crimes as suicides, serial murders, and the faking of madness. These accounts aim at bewildering and shocking demanding readers through a carefully displayed cult to excessive behaviour. The arranged “economy of death” displayed in murder accounts will set them apart from other exceptional instances, as proven by their long-standing presence in subsequent centuries.
E-Book (PDF)

A Murder of Crows

3 On the Edge: Living between Suicide and Madness
1 Official and False Madmen
2 Books, Titles, Laws
3 “Hanging from a Beam by Choice”
4 Living on the Edge

Bibliography
Index of Names and Subjects

All interested in the history of the non-fictional criminal genre, both academic and non-academic readership, since -analysis aside- primary sources include enticing, brief cases.