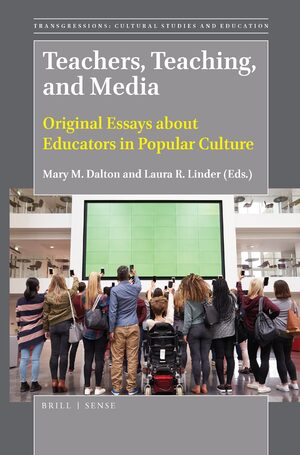 Editors: Mary M. Dalton and Laura R. Linder
Popular representations of teachers and teaching are easy to take for granted precisely because they are so accessible and pervasive. Our lives are intertextual in the way lived experiences overlap with the stories of others presented to us through mass media. It is this set of connected narratives that we bring into classrooms and into discussions of educational policy. In this day and time—with public education under siege by forces eager to deprofessionalize teaching and transfer public funds to benefit private enterprises—we ignore the dominant discourse about education and the patterns of representation that typify educator characters at our peril.

This edited volume offers a fresh take on educator characters in popular culture and also includes important essays about media texts that have not been addressed adequately in the literature previously. The 15 chapters cover diverse forms from literary classics to iconic teacher movies to popular television to rock ‘n’ roll. Topics explored include pedagogy through the lenses of gender, sexuality, race, disability, politics, narrative archetypes, curriculum, teaching strategies, and liberatory praxis. The various perspectives represented in this volume come from scholars and practitioners of education at all levels of schooling. This book is especially timely in an era when public education in the United States is under assault from conservative political forces and undervalued by the general public.

€45.00$54.00
​
Add to Cart
Mary M. Dalton is professor of communication at Wake Forest University where she teaches courses in critical media studies. Her scholarly writing includes The Hollywood Curriculum: Teachers in the Movies (Peter Lang, 2010), and she is a documentary filmmaker.

Teachers, Teaching, and Media: Original Essays About Educators in Popular is equally attractive as a textbook in courses on education and popular culture and as a source for scholars.