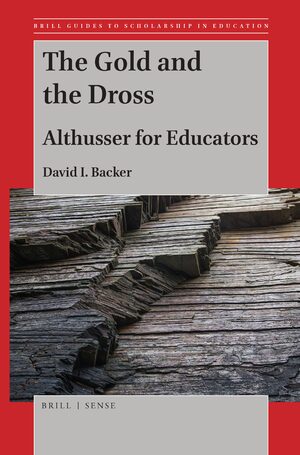 The Gold and the Dross

Series:  Brill Guides to Scholarship in Education, Volume: 1
Author: David I. Backer
In the last decade, there has been an international resurgence of interest in the philosophy of Louis Althusser. New essays, journalism, collections, secondary literature, and even manuscripts by Althusser himself are emerging, speaking in fresh ways to audiences of theorists and activists. Althusser is especially important in educational thought, as he famously claimed that school is the most impactful ideological state apparatus in modern society. This insight inspired a generation of educational researchers, but Althusser’s philosophy—unique in a number of ways, one of which was its emphasis on education—largely lost popularity.

Despite this resurgence of interest, and while Althusser’s philosophy is important for educators and activists to know about, it remains difficult to understand. The Gold and the Dross: Althusser for Educators, with succinct prose and a creative organization, introduces readers to Althusser’s thinking. Intended for those who have never encountered Althusser’s theory before, and even those who are new to philosophy and critical theory in general, the book elaborates the basic tenets of Althusser’s philosophy using examples and personal stories juxtaposed with selected passages of Althusser’s writing. Starting with a beginner’s guide to interpellation and Althusser’s concept of ideology, the book continues by elaborating the epistemology and ontology Althusser produced, and concludes with his concepts of society and science. The Gold and the Dross makes Althusser’s philosophy more available to contemporary audiences of educators and activists.
E-Book (PDF)

€45.00$52.00
​
Add to Cart
David I. Backer, West Chester University of Pennsylvania, is an assistant professor of Social and Cultural Foundations of Education. His work on school in its social context can be found in Harvard Educational Review, Educational Theory, Issues in Teacher Education and elsewhere. Based in Philadelphia, he is a member of the Democratic Socialists of America.
Acknowledgements
Introduction
General Plan and Purpose of This Book
Althusser’s Context
Althusser’s Life
Author’s Context
Note on Passages

1 A Beginner’s Guide to Interpellation
Getting in Trouble
At School
Get with the Program
Not Anything Impactful
I Don’t Remember What I Learned in School
Testing
Where Did My Friends Go?
Falling in Love
Is Interpellation Passive?
Ideology = Imagined Relations to Real Conditions
Wings
Race and Gender
Reproduction
Consent
Individuality
Images
Being Guided
Interpellation Machine
Intersectionality
Counter-Interpellation
A Grain of Sand
Hut
A Play
Our Society: Capitalism and Democracy

2 The Law of Dislocation
Concrete-Real vs. Concrete-in-Thought
Snakes, Ropes, and Concepts
The Gold and the Dross
Straying from Dislocation: Empiricism and Surplus Value
Petty, Laplace, and Capital Vol. 1
Leaves, Monads, and Other Simple Internal Essences
Shades of Hegel
Expressivism: (Dig Here)
Human Nature
Concepts behind ‘Words’
A Theory of Reading: Listening to Silence

3 The Law of Uneven Development
Every Thing Is a Mess
The dsa
Theory of Combination
Theory of Formation
Theory of Relative Autonomy
Theory of Determination
The Wrong Side of History
Acorns
Teleology on the Train
Concepts of Structure: Captain Planet vs. Voltron
The Two Laws: Three Reflections