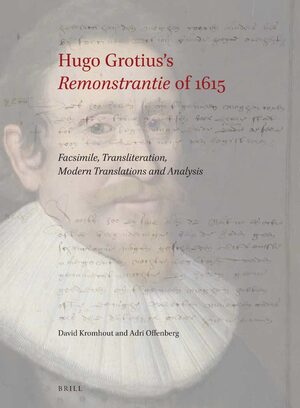 Authors: David Kromhout and Adri Offenberg
Grotius wrote the Remonstrantie around 1615 at the request of the States of Holland, to define the conditions under which Jews were to be admitted to the Dutch Republic. At that time, he was already an internationally recognized legal expert in civic and canonic law. The position taken by Grotius with respect to the admission of the Jews was strongly connected with the religious and political tensions existing in the Dutch Republic of the early 17th century. The Remonstrantie shows how Grotius’s views evolved within the confines of the philosophical and religious concepts of his time. It is an example of tolerance within political limits, analyzed by the author David Kromhout and made accessible through a modern translation.
E-Book (PDF)

€93.00$112.00
​
Add to Cart
David Kromhout (*1976) studied Hebrew and Jewish Studies at the University of Amsterdam. He wrote a dissertation on the Synod of Dort as a foucauldian event and its repercussions on the literary discourse of the Leiden humanists (University of Amsterdam, 2016).

Adri Offenberg (*1939 ) studied Dutch Philology, Bibliology, Hebrew and Danish at the University of Amsterdam. He was curator of the Bibliotheca Rosenthaliana from 1974 to 2004, editor-in-chief of Studia Rosenthaliana and of the volume Bibliotheca Rosenthaliana: Treasures of Jewish Booklore (1994).
Contributors: Marijke J. Blankman, Piet Hein Donner, Cis van Heertum, David Kromhout, Marianka van Lunteren-Spanjaard, Adri K. Offenberg.
All interested in the history of the Jews in the diaspora as well as historians of 17th century religious, political and cultural movements in Europe.