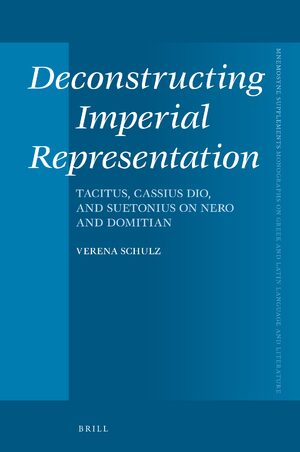 Series:  Mnemosyne, Supplements, Volume: 427
Author: Verena Schulz
What literary strategies do Tacitus, Cassius Dio, and Suetonius apply in portraying Nero and Domitian? This book argues that the three authors respond to and deconstruct the positive accounts of imperial representation that were prevalent during the lifetimes of the two controversial emperors. They take up motifs from these earlier accounts, which they re-interpret to construct their own negative portraits. Although Tacitus, Cassius Dio, and Suetonius discuss the same historical figures and events of early imperial Rome, they are rarely examined together in one volume. Verena Schulz offers the first combined reading of their works from a philological viewpoint, analysing the various rhetorical techniques and narratological devices that they display, and the different literary and historical discourses in which they are embedded.
E-Book (PDF)


Part 1 Constructing the Emperor in Historiography and Panegyric


Introduction
3 Imperial Representation and Topics of Deconstruction  1  Military Actions: from Peace to Inactivity, from Victory to Hypocrisy  2  Building Endeavours: from Construction to Destruction  3  Public Entertainment: from Popular to Eccentric Performances  4  Nero’s Speeches: Gaining Rhetorical Power  5  Divinity: from God-Like to Unhuman  6  Atmosphere: From Golden Age to the Dynamics of Bad Times
4 Strategies of Deconstruction in Tacitus  1  Overview: How to Deconstruct Imperial Representation  2  Negative Connotations: ‘Facts’, Additions, and Foils  3  Causation and Character  4  New Forms of Logic
5 Creating Uncertainty  1  Tacitus and Theories of Uncertainty  2  Playing with Variants  3  Playing with Oppositions  4  Uncertainty and Interpretation
Conclusion


Introduction
6 Writing Historiography under the Severans  1  The Roman History and the Early Third Century  2  Imperial Representation in the Roman History
7 Strategies of Deconstruction in Cassius Dio  1  Negative Connotations  2  Persuasive Characters  3  The Rhetoric of Combination  4  Selection and Focus  5  Spoiling the Atmosphere
8 Deconstruction and the Construction of Memory  1  Typologies of Bad Emperors  2  Hot Memory: Why Nero and Domitian?  3  Genealogies versus Typologies
Conclusion


Conclusion: Three Modes of Deconstruction
Appendix: Deconstruction and Rhetorical Strategies Bibliography Index
Scholars and students of Latin, Greek, and Ancient History interested in Tacitus, Suetonius, or Cassius Dio; in the emperors Nero and Domitian; in historiography as a form of literature.