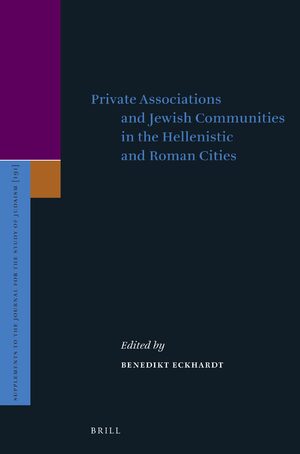 Private Associations and Jewish Communities in the Hellenistic and Roman Cities

Series:  Supplements to the Journal for the Study of Judaism, Volume: 191
Editor: Dr. Benedikt Eckhardt
In Private Associations and Jewish Communities in the Hellenistic and Roman Cities, Benedikt Eckhardt brings together a group of experts to investigate a problem of historical categorization. Traditionally, scholars have either presupposed that Jewish groups were “Greco-Roman Associations” like others or have treated them in isolation from other groups. Attempts to begin a cross-disciplinary dialogue about the presuppositions and ultimate aims of the respective approaches have shown that much preliminary work on categories is necessary. This book explores the methodological dividing lines, based on the common-sense assumption that different questions require different solutions. Re-introducing historical differentiation into a field that has been dominated by abstractions, it provides the debate with a new foundation. Case studies highlight the problems and advantages of different approaches.
E-Book (PDF)

€105.00$126.00
​
Add to Cart
Benedikt Eckhardt, Ph. D. (2011), University of Bochum, is Lecturer in Ancient History at the University of Edinburgh. He has published on both Jewish history and the history of private associations, including several articles in the Journal for the Study of Judaism.
This volume is a very useful contribution to the growing bibliography on ancient associations and synagogai in antiquity. Monson and Krause’s essays are outstanding illustrations of how careful comparison—what Smith called “disciplined exaggeration— can create new insight into familiar texts, and the Czajkowski and Baslez contributions are especially valuable for understanding Philo and Josephus’s perspectives on Judean groups.

John S. Kloppenborg, RBL, July 2020 The individual contributions are valuable treatments of a diverse set of data relating to the central question of how we should understand the organization of Jewish groups. The volume’s particular strength lies in its sustained engagement with the “Greco-Roman Associations” model. Eckhardt’s contributions are the most focused on this question and effectively underscore some of the weaknesses of the approach. Other chapters strike more of a middle ground, finding utility in fleshing out the details of poorly attested cases with comparative evidence. The result is an effective demonstration of the volume’s stated aim: to differentiate between the kind of historical questions that can and cannot be addressed effectively by the “Greco-Roman Associations” model. In so doing, it firmly grounds its approach to Jewish collectivities in a methodologically rigorous framework that does not abnegate the comparative paradigm but contests its primacy. This important volume will surely find a place at the center of future discussions.

4 Qumran Discipline and Rites of Affliction in Their Associational Context
Andrew R. Krause

7 Associations beyond the City: Jews, Actors and Empire in the Roman Period
Benedikt Eckhardt

9 The Associates and the Others: Were Rabbinic Ḥavurot Greco-Roman Associations?
Clemens Leonhard