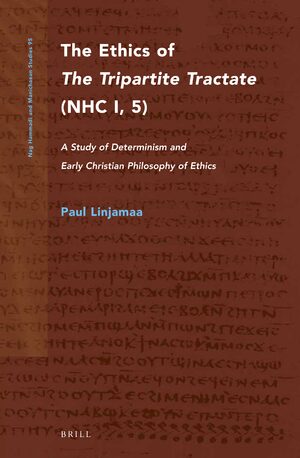 The Ethics of The Tripartite Tractate (NHC I, 5)

A Study of Determinism and Early Christian Philosophy of Ethics

Author: Paul Linjamaa
In The Ethics of The Tripartite Tractate (NHC I, 5) Paul Linjamaa offers the first full length thematical monograph on the longest Valentinian text extant today. By investigating the ethics of The Tripartite Tractate, this study offers in-depth exploration of the text's ontology, epistemology, theory of will, and passions, as well as the anthropology and social setting of the text.
Valentinians have often been associated with determinism, which has been presented as “Gnostic” and then not taken seriously, or been disregarded as an invention of ancient intra-Christian polemics. Linjamaa challenges this conception and presents insights into how early Christian determinism actually worked, and how it effectively sustained viable and functioning ethics.
E-Book

€132.00$159.00
​
Add to Cart
Paul Linjamaa, Ph.D. (2018), is a postdoctoral fellow at the Centre for Theology and Religious Studies at Lund University, Sweden. He has previously published a monograph on Valentinianism and is the author of several articles on the Nag Hammadi texts and early Christianity.
Acknowledgments
List of Abbreviations
Introduction
1 The Structure of the Present Study
2 Who Were the Valentinians?
3 The Myth in TriTrac and the Ethics in Storytelling
4 Previous Research on TriTrac and the Historical Setting of the Text
5 Early Christian Ethics and the Bad Reputation of Determinism
6 Notes on Translation and Transcription


1 The Ontological and Epistemological Foundations for Ethics
1 Knowledge in TriTrac and Ancient Epistemology
2 Phantasms, Likenesses, and Images: the Ontology of TriTrac and the Question of Logos
3 Remembering (and) the Nature of Virtue
4 The Individual and the Collective
5 Mixing and Blending, Truth and Falsehood
6 Conclusion: Ontology, Epistemology and Ethics

2 Emotions, Demons, and Moral Ability
1 Emotions and Cognitive Theory in Ancient Thought
2 Emotions and the Creation Narrative
3 The Logos’ First Movement and Ancient Cognitive Theory
4 Good Emotions
5 Negative Passions as “Mixed” Heavenly Powers and their Influence on Humans
6 Apatheia, Therapeia, and Eleutheria
7 Femaleness and the Sickness of Emotions
8 Conclusion


4 Natural Human Categories and Moral Progress
1 The Three Classes of Humans in TriTrac
2 The Pedagogical Purpose of the Logos’ Organization and the Composition of Humans
3 Three Categories of Humans According to TriTrac’s Epistemology and Theory of Passions
4 Restricted Choice in Practice
5 Fixed, Fluid, or in Flux? The Advantages of a Fixed Anthropology
6 Conclusions

5 School or Church? Teaching, Learning, and the Community Structure
1 On the Community Structure Behind TriTrac in Light of the Term “Church”
2 The Cosmos as a “School” in TriTrac and its Early Christian Context
3 The “School of Conduct” in the Pleroma and the Gaining of Form
4 The Cosmic School: an Imperfect Reflection of the Heavens
5 Silent and Oral Instruction: Formation, Baptism and Education
6 The Duty of the Pneumatic Moral Expert and the Formation of Psychic Christians
7 The Category of the ‘School of Valentinus’ in Early Christian Scholarship
8 Conclusions: the Dual Structure of the Community Behind TriTrac