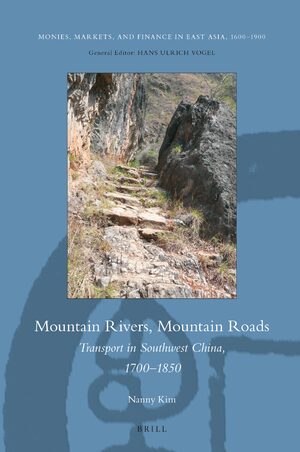 Author: Nanny Kim
The commercialized economy of late imperial China depended on efficient transport, yet transport technologies, transport economics as well as its role in local societies and in interdependencies of environments and human activities are acutely under-researched. Nanny Kim analyses two transports systems into the Southwest of Qing China through the long eighteenth century and up to the mid-nineteenth century civil wars. The case studies explore shipping on the Upper Changjiang in Sichuan and through the Three Gorges into Hubei, and road transport out of the Sichuan Basin across northeastern Yunnan and northwestern Guizhou into central Yunnan. Specific and concrete investigations of a river that presented extreme dangers to navigation and carriage across the crunch zone of the Himalayan Plateau provides a basis for a systematic reconstruction of transport outside the lowland centres and their convenient networks of water transport.
E-Book

€149.00$179.00
​
Add to Cart
Nanny Kim, PhD (2000) is a research fellow at Heidelberg University. She employs historical and geographical approaches in researching transport systems, mobilities, mining and landscape transformations with a main focus on southwestern China before the industrial period.
Acknowledgements
Notes on Place Names and Measures
List of Illustrations

Appendix 1: Annotated Bibliography of Sources on Late Traditional Shipping on the Upper Changjiang

Appendix 2: Boats and Boatmen of the Gorges’ River in Late Traditional Accounts

Appendix 5: Transporters of the Southwest in Late Traditional Accounts

Appendix 6: Notes on the Reconstruction of Transport Volumes on the Zhaotong and Weinings Roads ca. 1890–1900 in Tables 7.2 and 7.3

Appendix 7: Reconstructions of Transport Efficiencies
Bibliography
Index
All interested in the economic history of China, in comparative transport history, in the history of technology, of everyday life and in environmental history.