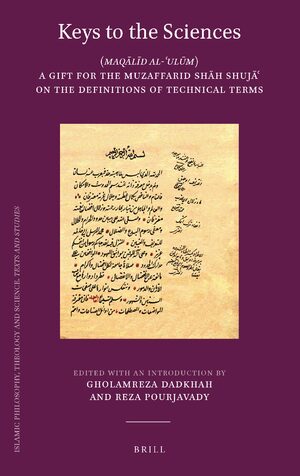 Keys to the Sciences

Editors: Gholamreza Dadkhah and Reza Pourjavady
Maqālīd al-ʿulūm (Keys to the Sciences) is a significant source on definitions of Arabic scientific terms in the post-classical period. Composed by an anonymous author, it contains over eighteen hundred definitions in the realm of twenty-one religious, literary, and rational sciences. The work was dedicated to the Muzaffarid Shāh Shujāʿ, who ruled over Shiraz and its neighbouring regions from 759/1358 to 786/1384. The present volume contains a critical edition of Maqālīd al-ʿulūm based on its three extant manuscripts. In the introduction, the editors review previous scholarship on the text, present an overview of patronage at the court of Shāh Shujāʿ and identify some of the sources used by the author of the work. They suggest that the work in its structure mirrors Abū ʿAbdullāh Khwārazmī’s Mafātīḥ al-ʿulūm, completed in 366/976.
E-Book

€109.00$129.00
​
Add to Cart
Gholamreza Dadkhah is Research Scholar (Islamic philosophy), University of Tehran. Among his publications are the edition of Shams al-Dīn Samarqandī’s (d. 722/1322) Science of the Cosmos and the Soul (Mazda Publishers, 2014), and together with Asadollah Fallahi, Logic in Sixth/Twelfth Century Iran (The Iranian Institute of Philosophy, 2018).

Reza Pourjavady, Ph.D. (Freie Universität Berlin, 2008), is Visiting Professor of Islamic History and Culture at the Eberhard Karls University of Tübingen. His publications include Philosophy in Early Safavid Iran: Najm al-Dīn Maḥmūd al-Nayrīzī and His Writings (Brill, 2011), and coauthored with Sabine Schmidtke, A Jewish Philosopher of Baghdad: ʿIzz al-Dawla Ibn Kammūna (d. 683/1284) and His Writings (Brill, 2006).

Appendix 1: Other Works in Prose Dedicated to Shāh Shujāʿ or His Viziers
Appendix 2: Sources of the Maqālīd al-ʿulūm
Bibliography

All interested in the history of science in the Islamicate world, and anyone concerned with the terminology of religious, literary, and rational sciences in Arabic.