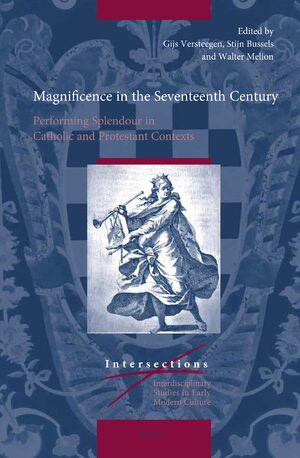 Magnificence in the Seventeenth Century

Editors: Gijs Versteegen, Stijn Bussels, and Walter Melion
This volume explores the concept of magnificence as a social construction in seventeenth-century Europe. Although this period is often described as the ‘Age of Magnificence’, thus far no attempts have been made to investigate how the term and the concept of magnificence functioned. The authors focus on the way crucial ethical, religious, political, aesthetic, and cultural developments interacted with thought on magnificence in Catholic and Protestant contexts, analysing spectacular civic and courtly festivities and theatre, impressive displays of painting and sculpture in rich architectural settings, splendid gardens, exclusive etiquette, grand households, and learned treatises of moral philosophy.

Stijn Bussels. Ph.D. (2005, Ghent University) is Professor of Art History at the Leiden University. He has published widely on the intersections between the visual arts, theatre and spectacle in the early modern Low Countries. He is the author of The Antwerp Entry of Prince Philip in 1549. Rhetoric, Performance and Power (Rodopi 2012).

Walter S. Melion is Asa Griggs Candler Professor of Art History at Emory University. He has published widely on early modern image cultures, on the art and art theory of the Low Countries, on scriptural image-making, on emblems and emblematics, and on Jesuit image theory.

Part 1: Traditions of Thought on Magnificence

Part 2: The Court and Aristocracy


4 The Hall of Realms, a Space for Royal Magnificence
Miguel Hermoso Cuesta

6 The Magnificence of the Royal Household and Royal Sites: The Case of the Spanish Monarchy
Félix Labrador Arroyo and José Eloy Hortal Muñoz

7 Educating Magnificence: Juan Eusebio Nieremberg on Ascesis and Splendour in his Manual for the Reales Estudios of the Colegio Imperial at Madrid
Gijs Versteegen

13 Magnificence and Regality in Milanese Celebratory Sets: The Birth of Balthasar Charles and Exequies in the Epoch of Philip IV
Alessandra Mignatti

14 The Ducal Stage: Festive Culture and the Display of Magnificence in Seventeenth-Century Württemberg
Kathrin Stocker

15 The Libertine Subversion of the Masque: The Case of John Wilmot’s Lucina’s Rape
Klaas Tindemans