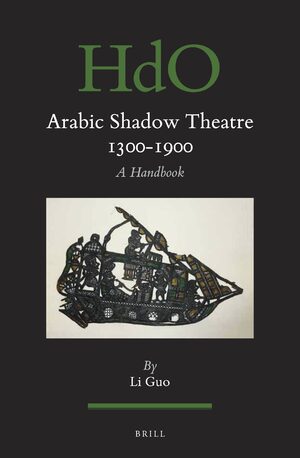 Author: Li Guo
This handbook aims mainly at an analytical documentation of all the known textual remnants and the preserved artifacts of Arabic shadow theatre, a long-lived, and still living, tradition — from the earliest sightings in the tenth century to the turn of the twentieth century. The book consists of three main parts and a cluster of appendixes. Part One presents a history of Arab shadow theatre through a survey of medieval and premodern accounts and modern scholarship on the subject. Part Two takes stock of primary sources (manuscripts), published studies, and the current knowledge of various aspects of Arabic shadow theatre: language, style, terminology, and performance. Part Three offers an inventory of all known Arabic shadow plays. The documentation is based on manuscripts (largely unpublished), printed texts (scripts, excerpts), academic studies (in Arabic and Western languages), journalist reportage, and shadow play artifacts from collections worldwide.
E-Book (PDF)

€110.00$132.00
​
Add to Cart
Li Guo, Ph.D. (1994), Yale University, is Professor of Arabic at the University of Notre Dame. His most recent book, The Performing Arts in Medieval Islam: Shadow play and popular poetry in Ibn Daniyal’s Mamluk Cairo (Brill, 2012) is the winner of the IIM Prize for Research in the category “New conceptual tools,” Institut International de la Marionnette, France, 2015.
"Li Guo's Arabic Shadow Theatre 1300-1900: A Handbook is a sweeping survey and interesting introduction to all things shadowy and theatrical. It is rare to say that an academic study is a joy to read, but this book certainly proved to be the case." - Usman Butt, in: Middle East Monitor, 2020
Preface
List of Figures

Appendix 3: The Cast
1 Egypt
2 Syria and the Levant
3 Tunisia and Algeria
4 Libya

Appendix 4: The Programme of a Layla Celebration