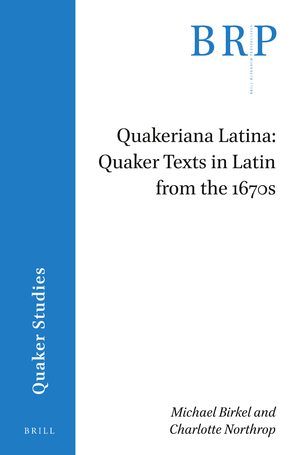 Quakeriana Latina: Quaker texts in Latin from the 1670s

Authors: Michael Birkel and Charlotte Northrop
Quakeriana Latina: Quaker texts in Latin from the 1670s juxtaposes translations of texts written in Latin by arguably the finest early Quaker theologians, George Keith and Robert Barclay. A commentary provides philological, historical, and theological perspectives. The works by Keith are two substantial letters to German polymath and Christian Kabbalist, Baron Christian Knorr von Rosenroth. The chief concerns of these letters are Christian appropriation of concepts from Jewish mysticism and eschatology. In the year before Keith began this correspondence, Barclay wrote his Animadversiones, a response to an attack from the Dutch Calvinist, Nikolaus Arnold, on his Theses Theologicae. Thus, both writers illustrate how a Quaker might write to a non-Quaker, even non-British, audience, one in a persuasive tone, and the other in a more polemical mode. Together, these texts cast new light on Quakerism in the 1670s.
E-Book (PDF)

€96.00$109.00
​
Add to Cart
Michael Birkel , Ph.D. (1986), Harvard University, is Professor of Christian Spirituality at Earlham School of Religion. He has published numerous books and articles in Quaker Studies, including Quakers Reading Mystics (Brill, 2018).

Charlotte Northrop, Ph.D. (2017), University of Cambridge, is Adjunct Professor of Ancient Latin at Earlham College, where she has taught Latin language and reading courses. She studies Latin poetic narratology and ancient identity.
Quakeriana Latina: Quaker Texts in Latin from the 1670s
Michael Birkel and Charlotte Northrop