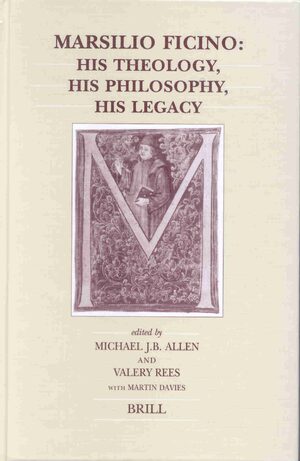 His Theology, his Philosophy, his Legacy

Editors: Michael Allen and Valery Rees
This volume consists of 21 essays on Marsilio Ficino (1433-99), the great Florentine scholar, philosopher and priest who was the architect of Renaissance Platonism and whose long-lasting influence on philosophy, love and music theory, medicine and magic extended across Europe. Grouped into three sections, they cover such topics as priesthood, the influence of Hermetic monism, Plotinus and Augustine, Jewish transmission of the prisca theologia, the 15th c. Plato-Aristotle controversy, the soul and its afterlife, the primacy of the will, theriac and musical therapy, the notions of matter, seeds, mirrors and clocks, and other fascinating philosophical and theological issues. Also considered are Ficino’s critics, his relationship to the Camaldolese Order, his letters to princes, his influence on art, on Copernicus, on Chapman, and the nature of the Platonic Academy.

Valery Rees, MA (Cantab) has been a member of the translation team working on Ficino’s Letters at the School of Economic Science, London since 1975 and is currently researching Ficino’s relationship with the court of Matthias Corvinus, King of Hungary.

PART II
9. Marsilio Ficino and the Plato-Aristotle Controversy, John Monfasani
10. Intellect and Will in Marsilio Ficino: Two Correlatives of a Renaissance Concept of the Mind, Tamara Albertini
11. Orpheus redivivus: The Musical Magic of Marsilio Ficino, Angela Voss
12. Ficino, Theriaca and the Stars, Donald Beecher
13. Concepts of Seeds and Nature in the Work of Marsilio Ficino, Hiroshi Hirai
14. Narcissus, Divine Gazes and Bloody Mirrors: the Concept of Matter in Ficino, Sergius Kodera
15. Ficino, Archimedes and the Celestial Arts, Stéphane Toussaint

PART III
16. Neoplatonism and the Visual Arts at the Time of Marsilio Ficino, Francis Ames-Lewis
17. Ficino’s Advice to Princes, Valery Rees
18. The Platonic Academy of Florence, Arthur Field
19. Ficino in the Firing Line: A Renaissance Neoplatonist and His Critics, Jill Kraye
20. Ficino and Copernicus, Dilwyn Knox
21. ‘To rauish and refine an earthly soule’: Ficino and the Poetry of George Chapman, Stephen Clucas

Bibliography
List of Contributors
Index
All those interested in intellectual history, the Renaissance, Platonism; history and philosophy of religion (Christian and Jewish), history of art, political theory, literature, early science, medicine and music.