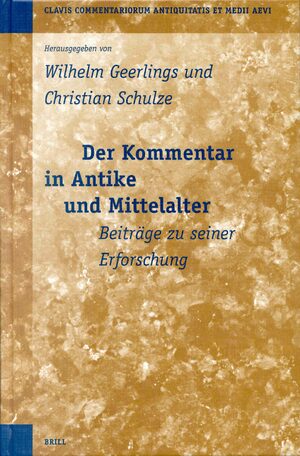 Editors: Wilhelm Geerlings and Christian Schulze
This collection of essays deals with the often neglected literary genre 'commentary' in ancient and medieval times. It is based on the work of the Bochum Graduiertenkolleg 237, where aspects such as definition, form and history of commentary texts, implicit commentation, pictures and paintings as commentaries were discussed. This volume presents a choice of 16 lectures which accompanied the colloquia from 1996.
Introductions, but also special topics from the perspectives of theology, philosophy, classical philology, medical history, Arabic and Jewish Studies are given by the contributors. Great emphasis is laid on the interdisciplinary connection between these different points of view, for example by discussing the question on the impact pagan rhetoric had on Christian commentary texts. Further interest is focused on relevant literature - medicine, grammar, philosophy - and its commentaries.
Hardback

€188.00$233.00
Add to Cart
Wilhelm Geerlings has been Professor in the History of the Old Church, Patrology and Christian Archaeology since 1980 at Bochum Ruhr-University. He has published extensively on patristic texts, especially Augustine. He is co-editor of the 'Fontes Christiani'. Christian Schulze, Ph.D. (1999), studied Classical Philology and Biology. He works at the Institute for the History of Medicine, Ruhr-University Bochum. He has published two books on Celsus and is presently examining the role of Christian medicine in Late antiquity in the graeco-oriental transfer of medical knowledge.
"A number of excellent papers..." – Daniel Stoekl, in: BMCR, 2004
Contributors include: Dagmar Börner-Klein; Christina D'Ancona Costa; Lucie Dolezalova; Gilles Dorival; Klaus-Dietrich Fischer; Wilhelm Geerlings; Ilsetraut Hadot; Elisabeth Hollender; Sibylle Ihm; Wolfgang Luppe; Hildegund Müller; Karla Pollmann; Ulrich Schindel; Christian Schulze; Gotthard Strohmaier; Otto Zwierlein.
All those interested in the genre 'commentary', its variations and history, especially in Antiquity and Middle Ages and all those interested in interdisciplinary connection between different disciplines.