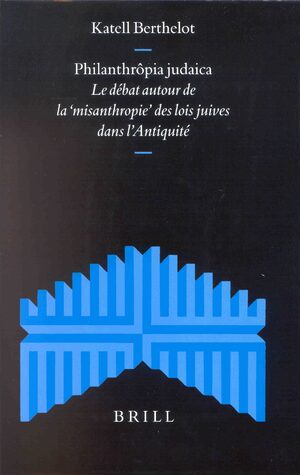 Author: Katell Berthelot
This volume deals with the accusations of misanthropy directed against the Jews during the Hellenistic and Roman period, and with the Jewish attempts to answer those charges.
The first part of the book examines the different meanings of the words philanthropia, misanthropia, apanthropia, philoxenia and misoxenia, and analyses the relevant Greek, Egyptian and Roman sources, in order to clarify the significance of the accusation of misanthropy for each writer.
The second part deals with the Jewish answers to these accusations, especially with Philo's and Josephus' attempts to show the humane character of the Mosaic Law.
This book is the first attempt to write a comprehensive history of this type of anti-Jewish discourse in Antiquity and of the Jewish reactions it provoked.
Hardback

€218.00$271.00
Add to Cart
Katell Berthelot, Ph.D. (2001) in History of Religions, Sorbonne University (Paris), is Researcher at the CNRS (National Center for Scientific Research, France). She has published several articles, mainly on Hellenistic Judaism.
All those interested in Jewish history, the history of the Hellenistic and Roman world, the history of anti-judaism, and Jewish apologetic literature, as well as New Testament exegetes.