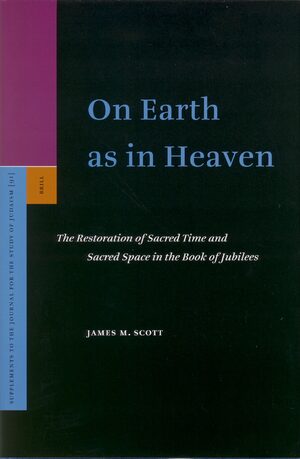 On Earth as in Heaven

Author: James Scott
This volume deals with the chronological and spatial conceptions underlying the Book of Jubilees, a Jewish apocalyptic writing of the mid-second century BCE, and shows how in these respects Jubilees forms a bridge between the earlier Enochic tradition and the later Qumran sectarian writings.
The book argues essentially that for Jubilees, the consummation of the ages will effect the restoration of sacred space and sacred time, so that all things correspond to God’s original will for the creation on earth as in heaven.
This book has important implications not only for the study of Jubilees itself and other Jewish writings of the Second Temple period, but also for research on early Christian chiliasm.
Hardback

151,00 €186,00 $
Hardback
Add to Cart
James M. Scott, Ph.D. (1989) in New Testament, University of Tübingen, is Professor of Religious Studies at Trinity Western University. His most recent book is Geography in Early Judaism and Christianity: The Book of Jubilees (Cambridge, 2003).
All those interested in Jewish writings in the Second Temple period (especially the relationship between the Enochic tradition, Jubilees, and the Dead Sea scrolls), as well as students of the New Testament and other early Christian literature.