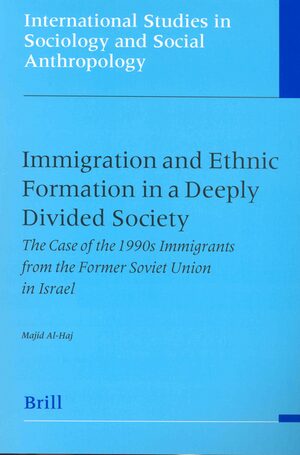 Immigration and Ethnic Formation in a Deeply Divided Society

Author: Majid Al-Haj
This book deals with the ethnic formation among the 1990s immigrants from the former Soviet Union in Israel, in light of both domestic changes, and developments in the Israel- Arab conflict. Based on a broad variety of quantitative and qualitative methods, the book presents a detailed analysis of identity patterns among these immigrants, their orientation in matters of religion, society, culture and politics, and their relationships with all the constituent groups in Israeli society – including the Palestinian minority.
The book provides a new critical perspective on questions of immigration, ethnicity and society in Israel. The analysis is placed in a global theoretical context that challenges the dominant approach in the sociology of immigration in Israel, which is based on the Zionist paradigm.
Paperback

€68.00$85.00
Paperback
Add to Cart
Majid Al-Haj, Ph.D. (1984) in Sociology, The Hebrew University of Jerusalem, is Professor of Sociology and the Head of the Center for Multiculturalism at the University of Haifa. He has published extensively on demography, ethnicity and education including Education, Empowerment and Control: The Case of the Arabs in Israel (SUNY, 1995).
Introduction. Immigrants from the Former Soviet Union in Israel Methodology Immigrants’ Survey Survey of the General Population Students’ Survey Focus Groups Chapter 1. Theoretical Framework Definitions of “Ethnic Group” Immigration and Ethnic Formation Ethnic Mobilization The Reactive Perspective The Competitive Model of Ethnic Mobilization Criticism of the Reactive and Competitive Approaches Rational Choice Theory The Role of the State Chapter 2. Israeli Society: A Background Immigration and the Construction of Social Boundaries Unique vs. Typical Immigration An Ideological Value or a Means to Achieve Political Goals Immigration and Ethnic Formation in Israel Background of Jewish Ethnicity Ethnic Composition over Time Ethnicity as a Socio-Cultural Rift The Modernization-Establishment Approach The Melting Pot Ideology Counter-approaches to Ethnic Relations Ethnic mobilization Ethnicity and the Religious-Nonreligious Divide The Jewish-Arab Divide Background Policy toward the Palestinians in Israel Social Change Economic Deterritorialization Political Territorialization Multiculturalism vs. Tribalism in Israeli Society Chapter 3. The Jews of Russia and the Former Soviet Union: Background and Waves of Immigration Emigration by Russian/Soviet/FSU Jews The First Waves to Palestine Immigrants from the Soviet Union in the 1970s Ethiopia: A New Reservoir of Immigrants Aspirations for Aliya from the West The 1990s Wave Main Trends Differences between the 1970s and the 1990s Waves Chapter 4. Identity Patterns and Ethnic Formation Communal Ethnic Organizations Sources of Information, Russian-Language Media Motivation for Migration and Connection with the Home Country Self-Identification Non-Jewish immigrants The Other – Definition: How Veteran Israelis Perceive the Immigrants Chapter 5. Attitudes toward Civil Society and Freedom of Expression Character of Israel Attitudes toward Peace Freedom of Expression Communication Environments Permissiveness The Ranking of Rights Chapter 6. Political Organization Voting Patterns in the Knesset Elections Collective vs. Individual Factors behind the Voting Patterns Factors behind the Voting for Prime Minister The Elections of 2003 Local Elections Chapter 7. Immigrants versus Israeli Society Adjustment Patterns Residential Adjustment Economic Adjustment Social Adjustment Mutual Influence Immigrants’ Social Distance from Other Groups in Israel Social Distance from Arabs Social Distance from other Jewish Groups Chapter 8. Attitudes of Veteran Groups toward Immigrants Attitudes in the Early 1990s Jewish Leadership Jewish Public The Arab Leadership Arab Public Trends over Time: A Decade later Internal Divisions within Jewish Populations Tolerance of Separate Immigrant Organizations Social Distance The Attitudes of the Younger Generation Social Distance as Felt by the Younger Generation Concluding Remarks References List of tables List of Figures
All those interested in Ethnicity, Migration, Multiculturalism, Minorities, Israel Studies, Middle Eastern Studies and Soviet Studies