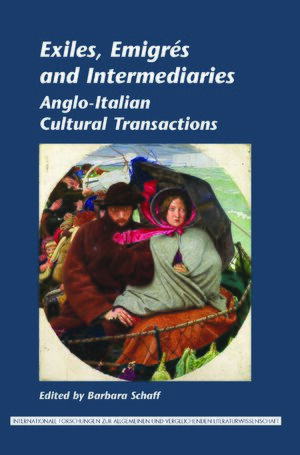 Exiles, Emigrés and Intermediaries
Anglo-Italian Cultural Transactions
Series: Internationale Forschungen zur Allgemeinen und Vergleichenden Literaturwissenschaft Online, Volume: 139and Internationale Forschungen zur Allgemeinen und Vergleichenden Literaturwissenschaft, Volume: 139
Editor: Barbara Schaff
This volume explores the dynamic and productive cultural forces engendered by exiles, wanderers, and diasporic communities in Britain and Italy over more than five centuries. It investigates the historic resonance of transnational encounters and movements between two European cultures that look back on a long history of cross-fertilisation. Drawn from a range of academic disciplines including literary studies, history, musicology, art history and bibliography, it presents the ways in which exiles, émigrés, intermediaries and their attendant cultural perspectives interact with the sometimes repressive, sometimes productive religious or political systems and ideologies that they encounter. This volume pays tribute to the stimulating exchange, circulation, and appropriation that has occurred between Britain and Italy, showing that the condition of displacement can lead not only to the articulation of loss and grief, but also to fruitful forms of interaction.
E-Book

Revolutions & Watersheds
Transatlantic Dialogues, 1775-1815
Series: DQR Studies in Literature, Volume: 26
Editors: W.M. Verhoeven and Beth Dolan Kautz
The years between 1775 and 1815 constitute a crucial episode in the evolutionary history of Europe and America. Between the start of the American Revolution, with the first armed clashes between British regulars and American militiamen at Concord and Lexington, and the closing act of the French Revolution, with the eclipse of Napoleon's dreams of pan-European glory on the battlefield of Waterloo, America and Europe witnessed the rise and fall of radicalism, which left virtually no aspect of public and private life untouched. While the American colonies managed to wrench themselves away from their colonial parent, and while France careered down the stormy rapids of its own Revolution, Great Britain went through the turbulent process of redefining itself vis-à-vis both these emerging nations, and the world at large. But the period 1775 to 1815 offers more than the two ideological Revolutions that determined the face of modern America and Europe: feeding into and emanating from these Revolutions there were major watersheds in virtually all areas of cultural, intellectual and political life - varying from the rise of Romanticism to the birth of abolitionism, and from the beginnings of modern feminism to the creation of modern nationhood and its enduring cultural stereotypes.
In this collection of interdisciplinary essays, historians and literary critics from both sides of the Atlantic analyze a broad spectrum of the watersheds and faultlines that arose in this formative era of Euro-American relations. Individually, the essays trace one or more of the transatlantic patterns of intellectual, cultural or scientific cross-pollination between the Old and the New World, between pre- and post-Revolutionary modes and mores. Collectively, the essays argue that the many revolutions that produced the national ideologies, identities and ideas of state of present-day America and Europe did not merely play a role in national debates, but that they very much belonged to an intricate network of transnational and, more particularly, transatlantic dialogues.
Hardback