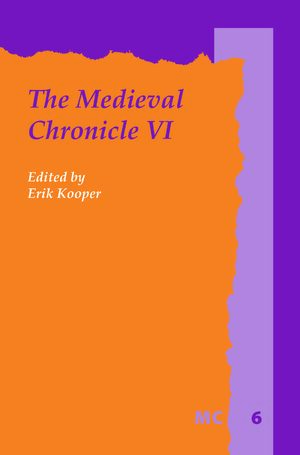 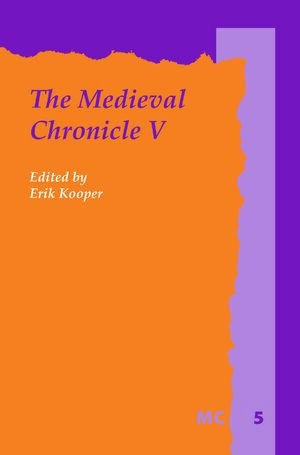 The Medieval Chronicle V
Series: The Medieval Chronicle, Volume: 5
Editor: Erik Kooper
There are several reasons why the chronicle is particularly suited as the topic of a yearbook. In the first place there is its ubiquity: all over Europe and throughout the Middle Ages chronicles were written, both in Latin and in the vernacular, and not only in Europe but also in the countries neighbouring on it, like those of the Arabic world. Secondly, all chronicles raise such questions as by whom, for whom, or for what purpose were they written, how do they reconstruct the past, what determined the choice of verse or prose, or what kind of literary influences are discernable in them. Finally, many chronicles have been beautifully illuminated, and the relation between text and image leads to a wholly different set of questions. The yearbook The Medieval Chronicle aims to provide a representative survey of the on-going research in the field of chronicle studies, illustrated by examples from specific chronicles from a wide variety of countries, periods and cultural backgrounds. The Medieval Chronicle is published in cooperation with the Medieval Chronicle Society.
E-Book

Producing the Pacific
Maps and Narratives of Spanish Exploration (1567-1606)
Series: Portada Hispánica, Volume: 18
Author: Mercedes Maroto Camino
Producing the Pacific offers the reader an interdisciplinary reading of the maps, narratives and rituals related to the three Spanish voyages to the South Pacific that took place between 1567 and 1606. These journeys were led by Álvaro de Mendaña, Pedro Fernández de Quirós and Isabel Barreto, the first woman ever to become admiral of and command a fleet.
Mercedes Maroto Camino presents a cultural analysis of these journeys and takes issue with some established notions about the value of the past and the way it is always rewritten from the perspective of the present. She highlights the social, political and cultural environment in which maps and narratives circulate, suggesting that their significance is always subject to negotiation and transformation. The tapestry created by the interpretation of maps, narratives and rituals affords a view not only of the minds of the first men and women who traversed the Pacific but also of how they saw the ocean, its islands and their peoples. Producing the Pacific should, therefore, be of relevance to those interested in history, voyages, colonialism, cartography, anthropology and cultural studies.
The study of these cultural products contributes to an interpretive history of colonialism at the same time that it challenges the beliefs and assumptions that underscore our understanding of that history.
Paperback

Poetry, Politics and Polemics
Cultural transfer between the Iberian peninsula and North Africa
Series: Orientations, Volume: 4
Editors: Otto Zwartjes, Geert Jan van Gelder and Ed C.M. de Moor
It is an established historical fact that both sides of the Straits of Gibraltar formed a cultural unity in many different periods. After the military success of Mûs_ ib Nusayr, Islam broght unity to Arabs and many Berber tribes in the Maghrib, but the struggle for independence and the adoption of the eastern Khârijî doctrine always caused struggles. It is a well known fact that the contingent of Berbers among the Muslims of al-Andalus outnumbered considerably the inhabitants from Arab origin. After the decline and collapse of the Umayyads and Hammûdids in al-Andalus, various Berger dynasties seized their power and founded many different kingdoms (Taifas, from Arabic mulûk al-tawâ'if). Arab Andalusi culture flourished, which can be demonstrated by the fact that Arabic became the most important language of the Iberian Peninsula under Muslim rule. On the other hand, large numbers of Andalusis emigrated to the Maghrib in many different periods. Already in the first centuries of Islamic spain, many Andalusis settled in North Africa. These Andalusis fled as a consequence of the drought, or were expelled for having collaborated against the regime or were forced to leave the Peninsula by the Christian Reconquista. Mutual migrations and political unity led to the exchange of many cultural phenomena between the two sides of the Straits. This fourth issue of Orientations focuses on some aspects of the ‘cultural transfer between al-Andalus and North Africa,' and particularly deals with some aspects of Poetry, Politics and Polemics from the eleventeenth to the seventeenth century.
Paperback