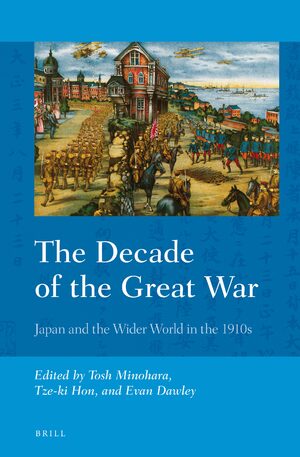 The Decade of the Great War
Japan and the Wider World in the 1910s
Editors: Tosh Minohara, Tze-ki Hon and Evan Dawley
Consisting of twenty-three essays, The Decade of the Great War examines the 1910s as a pivotal period with deep connections both to the imperialist heyday of the 1880s‒1890s, and to the vibrant global politics, commercial expansion, and social movements of the 1920s. It critically reviews Japan’s diplomatic and military relations, offering both a reexamination of some of the issues addressed in the earlier scholarship on the war years and a needed sense of the breadth of Japan’s new international relations. It highlights the importance of transnational approaches to the study of Japan’s domestic, intra-imperial, and foreign affairs. Together, the essays in this volume provide a wide-range of perspectives on relations within Asia and between Asian, European, and North American states.
Contributors are: Isao Chiba, Yuehtsen Juliette Chung, Evan Dawley, Martin Dusinberre, Bert Edström, Selçuk Esenbel, Rustin B. Gates, Tze-ki Hon, Masato Kimura, Chaisung Lim, John D. Meehan, SJ, Tosh Minohara, Hiromi Mizuno, Tadashi Nakatani, Sochi Naraoka, Yoshiko Okamoto, Sumiko Otsubo, Ewa Pałasz-Rutkowska, Caroline Rose, J. Charles Schencking, Chika Shinohara, Shusuke Takahara, and Sue C. Townsend.
E-Book

Dutch Colonialism and Indonesian Islam
Contacts and Conflicts 1596-1950. Second Revised Edition
Series: Currents of Encounter, Volume: 7
Author: Karel Steenbrink
This book tells the story of the contacts and conflicts between muslims and christians in Southeast Asia during the Dutch colonial history from 1596 until 1950. The author draws from a great variety of sources to shed light on this period: the letters of the colonial pioneer Jan Pietersz. Coen, the writings of 17th century Dutch theologians, the minutes of the Batavia church council, the contracts of the Dutch East India Company (VOC) with the sultans in the Indies, documents from the files of colonial civil servants from the 19th and 20th centuries, to mention just a few. The colonial situation was not a good starting-point for a religious dialogue. With Dutch power on the increase there was even less understanding for the religion of the muslims . In 1620 J.P. Coen, the strait-laced calvinist, had actually a better understanding and respect for the muslims than the liberal colonial leaders from the early 20th century, convinced as they were of western supremacy.
Paperback