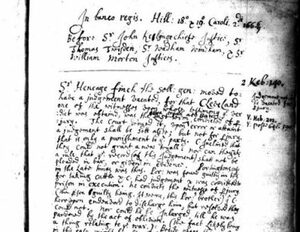 The Middle Temple is one of four Inns of Court in London, responsible for the education and accommodation of barristers. There is no printed catalogue of its manuscripts, and this microfiche publication makes available a number of important volumes which have rarely or never been consulted by scholars.

There are fifteen or more volumes of law reports dating from before 1700 (series R), including those attributed to William Brock 1586-93 (Phillipps MS. 25438), John Maynard, Sir George Treby and Lord Nottingham.
The later reports (2R) include some attributable to Sir Thomas Abney in the time of George II; a series from Doctors’ Commons 1771-7 (five volumes formerly in the Royal Courts of Justice); and those of the Georgian judges Sir Vicary Gibbs, Sir Henry Dampier and Sir Soulden Lawrence; there are also five volumes of Chief Baron Pollock’s judicial notebooks. By way of departure from the previous stages of the project, which comprised selections from much larger libraries, this stage includes all the legal manuscripts held by the Middle Temple and is therefore wider in scope.

The earliest items are a thirteenth-century Bracton and a Registrum Brevium given by Elias Ashmole in 1677, and an early-fifteeenth-century volume of Statuta Nova. Later treatises include Lord Nottingham’s Prolegomena and an early version of Bathurst’s Nisi Prius which belonged to its editor, Francis Buller.
The Treby collection contains 17 volumes deriving from Sir George Treby (d. 1700) and includes, besides law reports, a parliamentary diary from the 1640s and some draft statutes from 1652-3.
The Fearne-Butler collection, which derives from the two celebrated conveyancers, comprises around 50 volumes of opinions, precedents, drafts and notes, from the 1770s to the 1790s.
And the Phillimore collection contains ten volumes of opinions, judgments and notes from the celebrated family of ecclesiastical and admiralty lawyers, ending with some papers of Lord Phillimore (d. 1929).
Microfiche Collection 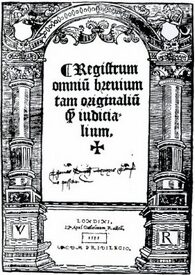