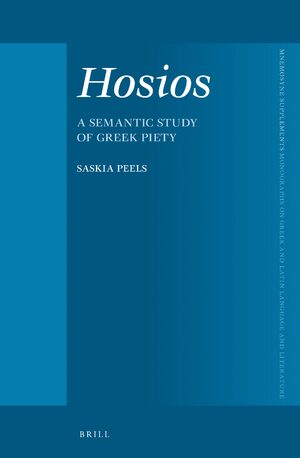 Hosios
A Semantic Study of Greek Piety
Series: Mnemosyne, Supplements, Volume: 387
Author: Saskia Peels
In Hosios: A Semantic Study of Greek Piety Saskia Peels elucidates the semantics of the Ancient Greek adjective hosios and its cognates. Traditionally rendered as ‘piety’, hosios was a key notion in Classical Greek religion and reflected a core value in Athenian democracy. Since antiquity, its meaning and usage have puzzled many. This study sets out to resolve various scholarly debates on the semantics of hosios by focusing on the idea of lexical competition. It illuminates the semantic relationship between hosios and its near-synonyms eusebês and dikaios, and the connection to the notion of the ‘sacred’. Using insights from modern linguistic theory, the book also aims to improve methods for research into the lexical semantics of a dead language.
E-Book