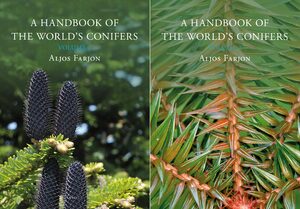 In: A Handbook of the World's Conifers (2 vols.)

In: A Handbook of the World's Conifers (2 vols.)

Pterocarpus marsupium is a popular spice incorporated into culinary preparations around the world, which is also used for its antidiabetic treatment in traditional medicine. The objective of the study was to evaluate the antioxidant and starch hydrolase inhibitory properties of Pterocarpus marsupium leaves. The total antioxidant capacity, total phenolics content, starch hydrolase inhibitory activities and superoxide dismutase mimetic (SODm) activity of various leaf extracts of Pterocarpus marsupium were studied. Extracts of dichloromethane (DCM), ethanol (EtOH), ethyl acetate (EtOAc), hexane (HEX), methanol (MeOH) and water were compared. The total phenolics contents of the extracts decreased in the order of water > EtOH > EtOAc > MeOH > DCM > HEX. The antioxidant and SODm activity values of the extracts decreased in the same order as the total phenolics contents, while the DPPH EC50 values increased in the reverse order. Pterosupin and pterostilbene had the highest content out of all the phenolic compounds quantified across all solvent extracts. The highest starch hydrolase inhibitory activities were observed in the water extract. Pterocarpus marsupium was observed to be a good source of antioxidant compounds and therapeutic properties.

“Wonderful” pomegranates can be stored under modified atmosphere (MA) conditions for up to 3–4 months after harvest. Until recently, the harvested fruit first needed to be transferred to the packing house and packed in MA bags in cartons or plastic boxes before cooling to the desired temperature and subsequent cold storage. During the last few years, together with StePac Ltd, we have developed a new methodology in which “Wonderful” pomegranate fruit are directly harvested into large 80 kg or even 320 kg bulk Xtend® MA bags in harvest bins, and then immediately transferred from the field to commercial cold storage rooms without the necessity of repacking the fruit at the packing house. In this study, we evaluated the postharvest storage performance and fruit quality of “Wonderful” pomegranates stored in bulk 80 kg Xtend® MA bags in harvest bins for various periods of 4, 8, 12, and 16 weeks at 7 °C followed by 1 week in shelf life conditions at 20 °C. The results show that “Wonderful” pomegranates can be maintained in bulk Xtend® MA bags in harvest bins at excellent quality with minimal losses for at least 12 weeks after harvest. Overall, this new suggested procedure allows direct transfer of large volumes of fruit from the field to cold storage rooms without intermediate transferring to the packing house, thus saving precious time and extra packaging and labor costs, and ensuring better maintenance of the cold storage chain.

Ripening parameters of newly released apricot cultivars (“Nitzan” and “Daniel”) are characterized and compared to an old local cultivar (“Mustakaui”), which is a white fleshed, sweeter, and smaller fruit, with a shorter shelf life. In 2 consecutive years, at harvest, we examined total soluble solids (TSS) and total acidity (TA) and, during postharvest, chlorophyll and firmness loss, and ethylene and carbon dioxide production rates. Our results show that “Mustakaui” is indeed sweeter and has a lower total acidity content than the other cultivars. However, “Mustakaui” has a similar rate of chlorophyll and firmness loss as the new cultivars. Despite similar rates of chlorophyll and firmness loss, “Mustakaui” produces the highest levels of carbon dioxide and “Daniel” produces the highest ethylene levels. “Nitzan”, on the other hand, did not produce any ethylene in 2 consecutive years, which suggests that another ripening control mechanism exists in this cultivar. Hence, the new cultivars might harbor different ripening programs in comparison to the old “Mustakaui” cultivar. Comparing the levels of volatiles in “Mustakaui” and “Nitzan” indicates that they share the capacity to produce similar volatiles, but these are produced differently in tree-ripened or postharvest-ripened fruits. Variability in volatiles might be useful for any future breeding programs for aroma.

The effect of habitat conditions on the lichens of selected Jewish cemeteries in Podlasie (northeastern Poland)
Author: Anna Matwiejuk

Grafting is a rapid, effective alternative to the relatively slow methodology of breeding, to provide crop plants with increased tolerance to environmental stress and better yield and quality of fruit vegetables. We evaluated the effect of grafting and soil disinfestation on pre- and postharvest parameters in two consecutive years. In both 2013 and 2014, soil disinfection significantly improved the viability of nongrafted plants compared to the same plants grown in nontreated soil. In both years, plants which were grafted on “Nurit” or “TZ” rootstocks showed significantly better vine vigor, with no evidence of disease in either disinfested or nontreated soil. The yield of marketable watermelon fruit was significantly higher in grafted versus nongrafted plants. Grafting significantly influenced watermelon rind color and flesh color, and strongly influenced taste and texture. Watermelon fruit harvested from plants grafted on “Nurit” were tastier and had better flesh texture than fruit harvested from “TZ”-grafted plants. Disinfection during those two years affected only seed formation. The year factor highly influenced rind color, total soluble solids (TSS) near the rind, TSS at the fruit's heart, taste, and texture. An interaction between grafting and year was found on flesh and TSS near the rind. No grafting × disinfection × year interaction was found.

Various propionic acid (PA) based additives are used to successfully inhibit fungi in silages. These additives are all introduced directly, and an encapsulated formulation of PA has not yet been examined for its antifungal abilities. The current study's objective was to test the possibility of using encapsulated PA as a silage additive. Carboxymethylcellulose (CMC)-based films (film A) and CMC/β-cyclodextrin-based films (film B) were used as biodegradable matrix platforms for encapsulated PA delivery and tested on whole-crop wheat and corn silages. Films were added as a mixture combined with the silage or divided at the top and bottom of the bulk silage system. A Lactobacillus plantarum inoculation procedure was also examined for its effects. In the wheat ensiling experiment, film B resulted in the highest PA concentrations after 2 weeks (1.4% and 1.1% in dry matter for the mixed and divided films, respectively). Mixed film A also produced high levels of PA after 2 weeks. Lactic acid (LA) concentrations peaked after 2 weeks and the highest final concentrations were obtained in the L. plantarum treatment. The highest PA concentrations in the corn silages were measured at the end of the experiment. Film B tended to result in slightly higher PA concentrations than film A. LA concentrations peaked after 2 weeks and the highest final content was obtained with film B. Overall, this study demonstrates that addition of encapsulated PA to biodegradable CMC films may provide an advanced safe approach for retaining silage quality and wastage reduction.

Brassica is a very important vegetable group worldwide. Cold and freezing stress are the major environmental factors that limit the productivity of Brassica. In this study, we retrieved 903 stress-chilled unigenes and the unique transcripts were classified functionally using gene ontology (GO) hierarchy, Kyoto Encyclopedia of Genes and Genomes (KEGG). KEGG orthology and structural domain data were obtained from the biological database to the unigene data set. Unigene data sets provide a wide outlook of functional characterization of Brassica rapa. In silico analysis revealed 94.2% of unigenes to be well annotated toward Reeds one-dimensional concept. On the basis of similarity searches and GO annotation of biological process (BP), 139, 113, and 57 sequences showed a response to stress (SR), abiotic stimulus (AS), and biotic stimulus (BS), respectively. To validate this observation, seven unigenes were randomly selected from AS that are known to be associated with cold stress from previous studies in other species and these genes were examined by real-time polymerase chain reaction to understand the change in expression pattern under cold and freezing stress. In silico study of occurrence in the AS subcategory revealed the presence of 138 single sequence repeats, some of which are being explored to assess genetic diversity among B. rapa. Thus, the unigene data set provides valid resources for discovering the potential genes related to cold and freezing resistance in B. rapa cultivars, and can be useful resources for genetic engineering of Brassica sp.

Fiber cables in leaf blades of Typha domingensis and their absence in Typha elephantina: a diagnostic character for phylogenetic affinity
Authors: Allan Witztum and Randy Wayne

Vertical fiber cables anchored in horizontal diaphragms traverse the air-filled lacunae of the tall, upright, spiraling leaf blades of Typha domingensis, T. angustifolia, T. latifolia and T. × glauca. The fiber cables may make a mechanical contribution to leaf blade stiffness while allowing flexibility under windy conditions. We examined the very tall, upright, spiraling leaf blades of T. elephantina, which can be over 4 m long, for fiber cables. In the tall species of Typha, there are two alternative architectures for upright leaf blades. T. domingensis utilizes fiber cables to enhance stiffness in the tall, upright concavo-convex leaf blades, whereas T. elephantina may maintain their tall stature in the absence of fiber cables by having a different cross-sectional geometry. These alternative architectures can be used as a diagnostic character along with other morphological characters to assess phylogenetic affinity in Typha. The very tall T. elephantina which lacks fiber cables may be more closely related to the much shorter T. minima, which also has no cables, than to the tall T. domingensis and T. angustifolia, both of which have prominent fiber cables. T. elephantina and T. minima share other morphological characters as well.