The following contribution focuses on Assyrian stone reliefs depicting winged figures holding a bucket and reaching a cone-shaped object toward a stylized tree. Ever since the discovery of the reliefs, the cone-shaped object was considered as either a conifer cone or a date palm male inflorescence used in the symbolic pollination of the stylized tree, derived from the date palm. Utilizing the visual material combined with textual evidence and based on the importance of the date palm as economic resource that gave rise to a plethora of meanings, religious, royal and popular, I shall argue that the scene refers to the artificial pollination of the tree.

Over the last century, crosstalk between archaeologists and botanists had focused on the identification of plants remnants, such as charcoal or seeds found in archaeological inventory. Here we demonstrate how botany can play a fundamental role in identifying ancient landscape by using current vegetation. Identifying the loci of ancient human activity is the initial step of any archaeological study, enabling analyses such as settlement patterns, economic structures and land use, as well as devising excavations strategy. While mounds (tells) are standing out of their surroundings and are easily detected, other sites are hidden underground, and require various methods for detection. The cost and intensity of these methods vary, but most are time-consuming, require a team of specialists, and show somewhat limited success, leading archaeologists to seek new methods of site detection. Here, we describe a study of vegetational parameters at Tel ‘Eton (Israel), located in a semi-arid climatic region, where vegetation is mostly herbaceous, mainly comprised of annual plants. We compared above ground biomass, species richness and species composition among four plots in Tel ‘Eton and its surrounding. Two plots were located where ancient settlement found in a previous study, one on top of the mound and one below, where a “lower city” was previously identified. The other two plots were located in similar topographies, namely one on a hill and the other below, but in never-settled areas. While above ground biomass was similar between settled and not-settled plots, species richness was significantly higher in settled plots (40 and 32 species in settled plots, versus 28 and 9 species in non-settled) and species composition was significantly different between them. Our results demonstrate that loci of buried remains of human activity significantly differ from non-settled ones, hence providing the basis for an above ground indirect method of identification of human remains. We propose that floristic sampling of ground-level vegetation may allow archaeologists to identify buried sites, and hence increase the validity of various types of archaeological analyses, such as creating maps of settlements, which rely on the identification of sites without excavating them.

Dr. Alexander Eig is a figure of major importance in the history of botany in Israel. This paper attempts to evaluate, for the first time, personal contacts that influenced his academic development. Archival research reveals that his meeting with one of the greatest plant researchers of the 20th century, N.I. Vavilov, in 1926 had a great impact upon him. It was Vavilov who stimulated the young Alexander Eig to undertake his first taxonomic work and write his first monograph. This article reproduces and discusses a newly discovered letter, written by Vavilov to Yitzhak Volcani, the head of the Institute of Agriculture and Natural History in Israel, under whose leadership Eig began his academic work. This document points to the existence of a mutual understanding and cooperation between Vavilov and Volcani. Furthermore, Vavilov’s letter explains why Eig’s academic work, and that of generations of Israeli botanists who followed in his footsteps, chartered the path it took. 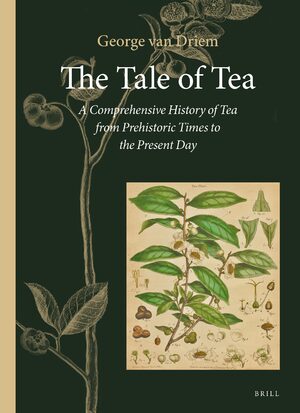 The Tale of Tea
A Comprehensive History of Tea from Prehistoric Times to the Present Day
Author: George L. van Driem
The Tale of Tea is the saga of globalisation. Tea gave birth to paper money, the Opium Wars and Hong Kong, triggered the Anglo-Dutch wars and the American war of independence, shaped the economies and military history of Táng and Sòng China and moulded Chinese art and culture. Whilst black tea dominates the global market today, such tea is a recent invention. No tea plantations existed in the world’s largest black tea producing countries, India, Kenya and Sri Lanka, when the Dutch and the English went to war about tea in the 17th century. This book replaces popular myths about tea with recondite knowledge on the hidden origins and detailed history of today’s globalised beverage in its many modern guises.

We revisited questions about changes in the incidences of functional wood anatomical traits through geologic time and compared the incidences of these traits in the fossil record with modern wood anatomical diversity patterns in order to test classical (“Baileyan”) and more recent ecophyletic hypotheses of xylem evolution. We contrast patterns through time for tropical and higher (paleo)latitudes. Data are from the InsideWood database. There are striking differences between woods from high and mid latitudes versus tropical (paleo)-latitudes. At temperate and subtropical latitudes (Laurasia and high latitude Gondwana), the epoch by epoch time series supports the Baileyan transformation series of vessel-bearing woody angiosperms (basal woody angiosperms and eudicots): “primitive” features such as scalariform perforations, exclusively solitary vessels, apotracheal diffuse parenchyma and heterocellular rays abound in the Cretaceous and become much less frequent in the Cenozoic, especially post-Eocene. In contrast, in the paleotropics hardly any changes occur in the incidences – each epoch has an equally “modern” spectrum of wood anatomical attributes. Although climatic gradients from the poles to the equator were less steep in the Cretaceous than in the late Cenozoic, the wood anatomical differences between mid-high latitude woods and tropical woods were much more pronounced in the Cretaceous than in later epochs. This seeming paradox is discussed but we cannot resolve it.

We suggest that tropical conditions have accelerated xylem evolution towards greater hydraulic efficiency (simple perforations), biological defense and hydraulic repair (elaborate paratracheal parenchyma patterns) as evidenced by late Cretaceous tropical latitude woods having near modern incidences of almost all traits. At higher paleolatitudes of both the Northern and Southern Hemisphere “ancestral” features such as scalariform perforations were retained in cooler and frost-prone regions where they were not selected against in mesic habitats because of lower demands on conductive efficiency, and could even be advantageous in trapping freeze-thaw embolisms. The fossil wood record remains too incomplete for testing hypotheses on the wood anatomy of the earliest angiosperms. The low incidence of so-called “xerophobic” woods sensu Feild with scalariform perforations with numerous (over 40) closely spaced bars in the Cretaceous tropical fossil record is puzzling. At higher paleolatitudes such woods are common in the Cretaceous.

Ring porosity, an indicator of seasonal climates and deciduousness, occurs at low levels in the Cretaceous and Paleogene at higher paleolatitudes only, and reaches modern levels in the Miocene. In Neogene and Recent temperate Northern Hemisphere, wide vessels are virtually restricted to ring-porous woods. In the tropics, there is a low incidence of ring porosity throughout all epochs.

The fossil record indicates that ecophysiological adaptation to tropical or temperate conditions was already evident in the Cretaceous with considerable latitudinal differences.

Mango burl is an important disease affecting many mango plantations in India and causes great loss in yield and decrease of vigour. We carried out a diagnostic survey for burl disease (sometimes also referred to as crown gall) in different varieties of mango (Mangifera indica L., Anacardiaceae) throughout India during 2015 and 2016. More than 500 mango genotypes were screened for disease susceptibility and more than twenty-three mango genotypes in different parts of India were found susceptible to this disease. Burls initiate as small tumorous growths and become more pronounced as warty outgrowths with the increasing age of the individual tree. Samples of burl were collected from all popular varieties from different parts of the country and subjected to histological investigations.

The present study confirms that mango burl disease is caused by Agrobacterium tumefaciens using evidence from the “carrot assay” and molecular identification of the presumed causal organism. The latter was isolated and inoculated on carrot disks to induce typical symptoms.

The xylem of the burl tissue was deformed and showed no specific orientation of the wood cells. Dimensional details and morphology of xylem cells vary at different positions within the burl. In a 10 cm diameter burl, the marginal portion showed xylem cells in circular arrangement. Vessel elements and fibres were very short while rays were relatively low and biseriate rays were observed rarely. Orientation of the xylem tissue was lost and all three plains (i.e. transverse, tangential and radial view) were observed in the same section. Cells from the middle portion of the burl were isodiametric, oval to circular, thick-walled and lignified, in morphology not dissimilar from callus tissue. Tyloses were common in all the cell types viz. fibres, ray cells, tracheids, axial parenchyma cells, and vessel elements.