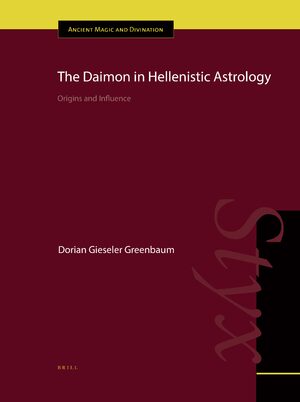 The Daimon in Hellenistic Astrology
Origins and Influence
Series: Ancient Magic and Divination, Volume: 11
Author: Dorian Gieseler Greenbaum
In The Daimon in Hellenistic Astrology: Origins and Influence, Dorian Gieseler Greenbaum investigates for the first time the concept of the daimon (daemon, demon), normally confined to religion and philosophy, within the theory and practice of ancient western astrology (2nd century BCE – 7th century CE). This multi-disciplinary study covers the daimon within astrology proper as well as the daimon and astrology in wider cultural practices including divination, Gnosticism, Mithraism and Neo-Platonism. It explores relationships between the daimon and fate and Daimon and Tyche (fortune or chance), and the doctrine of lots as exemplified in Plato’s Myth of Er. In finding the impact of Egyptian and Mesopotamian ideas of fate on Hellenistic astrology, it critically examines astrology’s perception as propounding an unalterable destiny.
E-Book