1 Living Bodhisattvas and Hijiri: Eison, Ninshō, and the Cults of Manjuśrī and Gyōki
Author: David Quinter

This chapter centers on the late 1230s through the 1240s and examines the early activities of Eison and his most famous disciple, Ninshō. The two monks met in 1239, when Ninshō discussed with Eison his plans to compose seven Mañjuśrī images and enshrine them at seven outcast communities as a memorial to his deceased mother. The introduction of the Mañjuśrī cult and social welfare practices to the Saidaiji order’s activities is directly tied to this meeting. Yet despite the master-disciple relationship and close collaboration between the two monks from this time, contrasts in their monastic and cultic orientations deserve greater recognition. This chapter addresses the contrasts in their involvement in the Mañjuśrī cult, the closely connected cult of the itinerant saint Gyōki (668-749), and social welfare activities. I argue that while Ninshō’s social welfare activities show close emulation of Gyōki, Eison’s literary and ritual efforts point toward a simultaneous emulation of the deity (Mañjuśrī) and “erasure” of the saint believed to have incarnated that deity (Gyōki). 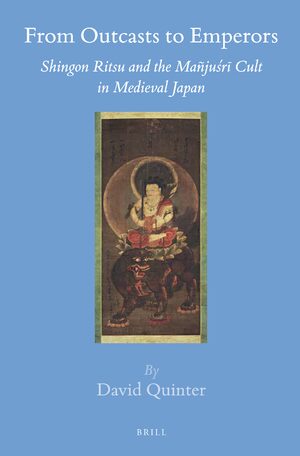 1 Transcendence and the Mundane at the Edge of the Middle Kingdom: Protestantised and Pragmatic Tibetan Buddhism in Hong Kong
Author: Joshua Esler

10 Patterns of Intensification of the Laws on Ritual Purity in Medieval Jewish Ashkenaz
Author: Hanna Liss

From 1926, Caodaism (Đạo Cao Đài) has flourished as the centre of new religious development in Vietnam. Its vast and complex syncretic theology continues to serve as a meeting ground between an East Asian tradition revivified (animism, Confucianism, Daoism, Buddhism, and ancestor worship) and a colonialist modernity localised (Catholicism, French Masonry, Theosophy, and Spiritualism). One of the significant paradigms through which this sacred re-narration of Vietnamese religious history can be conceptualised is through the great mural of the religion. Created to adorn the vestibule of every temple to God, the mural contains three historical figures that represent in essence the wider Caodaist religious and cultural project. In this chapter I examine in detail the symbolic relevance of these figures, Vietnamese poet and seer Nguyễn Bỉnh Khiêm [1491-1585], leader of the Chinese nationalist revolution Dr Sun Yat Sen [1866-1925], and French author Victor Hugo [1802-1885]. Separately they signify certain aspects of the modernist hope of those Vietnamese who came to worship them as saints of the new faith. Together in one mural, this chapter will reveal how these figures additionally symbolise a very specific global, modernist, and millenarian hope.

The Country of Malaysia is not only diverse in culture and during its history, but also contains a plurality of active religious traditions. This unique lifestyle has affected modernizing transformations during the twentieth and early twenty-first centuries. The influence of the minority religions on economic policy is a notable example. The socio-religious climate of Malaysia and its various ethnic groups have all contributed to economic and in turn political developments within the nation. This paper will explore the links of how the pluralist environment of the country has directly affected and continues to shape the social, economic, political discourse of the country. Subtle elements such as constitutional preference over one religion and the various economic policies show that the religious pluralism of Malaysia and globalising factors have had wide ranging influences on the country and its people. As such this paper will argue that in the development of Malaysia as a nation its many religious traditions have had a role to play. With arguably the minority religions being a more dominant factor that the majority Muslim community. These religions have interacted and influenced each other in developing Malaysian identity-politics and economic policy for its contemporary citizens.

Singapore, a small and cosmopolitan city-state in Southeast Asia, is located among the dynamic economies of the Pacific Rim. It takes up the most special position in Southeast Asia, not only for its economic prosperity and strict governance but also its unique diversity of ethnic, cultural, linguistic and major religious heritages such as Buddhism, Islam, Hinduism, Chinese folk religions and Christianity. Among them Christianity is the fastest growing and the most significant religion in the multi-ethnic Asian nation as it socially made a remarkable impact on the establishment of modernity in Singapore. The profile of the new western religion in Singapore has changed dramatically since the founding of modern Singapore by Sir Stamford Raffles in 1819. Then, how has the profile of Christianity been changed since the beginning of the nineteenth century? How did the western religion make social influence in Singapore particularly through the Christian mission educations? This section explores the history and development of Christianity: from the earliest mission effort of British and American missionaries, to the settlement of Christianity amidst a highly diversified population in Singapore today. This gives a special attention on how Christianity created social transformations of Singapore through the religious education.

13 Purifying the Pure: The Visuddhimagga, Forest-Dwellers and the Dynamics of Individual and Collective Prestige in Theravāda Buddhism
Author: Sven Bretfeld