First, this chapter will summarize the arguments of the preceding chapters. Then, their analyses will be combined to produce a comprehensive picture about the possible effects of the political and ideological context on the final redaction as well as the redactional objective of presenting the unfinalized ideological dialogue. At the end, this study will conclude with the contributions made to scholarship and potential areas for future research, as well as what may be of value for the contemporary faith community. 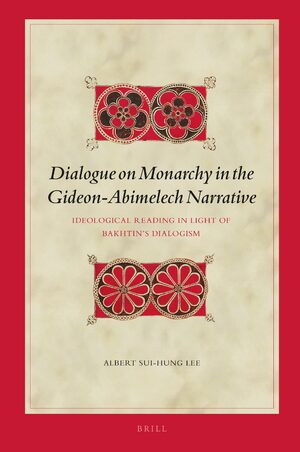 This chapter presents a literature survey on the Gideon–Abimelech narrative and establishes the feasibility of applying Bakhtin’s dialogism to this text. First, it will present a history of scholars’ interpretations regarding the ideological attitudes toward monarchy in the narrative. It will demonstrate the coexistence of two opposing ideologies—pro- and anti-monarchical and then, to better analyze their coexistence, it will explore the feasibility of using the concepts of multiple redactional layers and multiple voices for a re-interpretation of the text. Next, Bakhtin’s dialogism will be introduced, along with an examination of several biblical scholars’ use of dialogism. Lastly, this chapter will consolidate the insights gained from past scholarship to define this study’s research approach and critical principles.

This chapter will introduce additional analysis of the changing genres in the Abimelech narrative to further demonstrate the redactor’s intention to make the ideological attitudes toward monarchy variable and ambiguous. With this foundation, the end of this chapter will reread the Abimelech narrative for a detailed examination of the ideological dialogue. Although the narrative is not as anti-monarchical as many scholars have claimed, it is as unfinalized regarding the anti- and pro-monarchical ideologies as the Gideon narrative.

To support studying the dialogue between the pro- and anti-monarchical ideologies in the Gideon narrative, this chapter takes a few preparatory steps to justify the reading of the narrative through the lens of Bakhtin’s dialogism. This chapter will first explore how the literal significance of twoness in the narrative helps the readers understand the redactional objective of inviting the readers to read the text in a more dialogical way. Then, a study of Gideon’s dual image will imply that the characters keep changing both their images and ideological voices. With these two analyses as the foundation, this chapter will explore the literary function of the ambiguous monarchical portrait for our reading of the ideological dialogue. Finally, this chapter will present a narrative’s macrostructure to examine the ideological dialogue with monarchy as its focal point.

Gideon’s verbal refusal of the offer of kingship and his actual performance of a king’s roles in addition to his son’s reign make the ideologies of the Gideon–Abimelech narrative appear ambiguous. This has resulted in a long debate without consensus among scholars about the narrative’s ideological attitude toward monarchy. To solve this problem, this book seeks to uncover the endless dialogue between anti-monarchical and pro-monarchical “voices” in the text and identify the two communities in the historical context of the narrative through the lens of Mikhail Mikhailovich Bakhtin’s dialogism.

This chapter provides a brief summary of the Gideon–Abimelech narrative to show the significance of monarchy and the tensions between the characters as these factors present the narrative as a text of ideological tension concerning monarchy. Then, I will explain the purpose of this book by introducing Bakhtin’s concept of dialogism to resolve the tension between the vacillating ideologies concerning monarchy within the narrative. The aim of each chapter will be presented in the outline of the book at the end.

This chapter will first specify the dating of the final redaction of Judges to identify the possible historical context of the Gideon–Abimelech narrative. Subsequently, two possible, distinctive communities, namely, the remnants and the deportees, will be considered as the bearers of this narrative, according to my interpretation of the textual and archeological evidence. Lastly, I will demonstrate an ideological dialogue concerning the restoration of the Davidic monarchy in several exilic or post-exilic prophetic books; this dialogue will be associated with the unfinalized ideological dialogue related to the monarchy in the Gideon–Abimelech narrative. This connection between the story and its context will enable the reconstruction of the historical context.

Part 1 Arabia of the Old: The Things of the Trade
Editors: Ileana Baird and Hülya Yağcıoğlu
Open Access