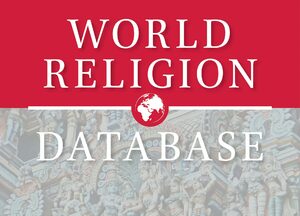 World Religion Database
International Religious Demographic Statistics and Sources
The World Religion Database (WRD) contains detailed statistics on religious affiliation for every country in the world. It is the major source to render a definitive picture of international religious demography. The WRD provides both current and historical data, as well as sophisticated forecasts of future developments. For each of the world’s religions, best estimates at multiple dates for the period 1900 to 2050 are given. The WRD also offers access to the sources which underlie the figures in the database, such as censuses and surveys. Through an interactive feedback mechanism users can leave comments on sources or methodology related to any figure reported in the WRD. The WRD is constantly updated with new sets of data as they become available, such as estimates of religious affiliation at the province level and religious freedom information for all countries in the world. No other database available today is as comprehensive.
Database Functionality - Sort, Modify, Print, or Export query results - Customize reports and download data to generate charts, tables, and graphs - Simple keyword search - Browse pre-formatted directories on country, peoples, religions, etc. - Access user stats (librarians only)
Features and Benefits - Global comparative figures for every major religion - Population and religious adherents for every country and United Nations region - Access to source material on religious affiliation (census and survey figures) - Breakdown of major religions into traditions (e.g. Sunni-Shi’as within Islam) - Multiple data points to compare growth rates (1900, 1950, 1970, 2000, 2005, 2025, 2050) - Feedback mechanism for users to comment on data, sources and methodology - Updated quarterly
Five demo’s with search examples are available on Brill’s Youtube channel. For this, see: https://www.youtube.com/playlist?list=PLHM0LYDn_HSMQICsWav13mFYBYV2ft9MN
Online