In this article, I examine the presence of Spinoza within Jean-Luc Nancy’s deconstruction of Christianity project. Although the debt Nancy owes to other philosophers such as Derrida and Heidegger has been recognized, less well known is his reliance on a Spinozist frame of reference throughout his writings on Christianity. Analyzing Nancy’s reading of key moments within the deconstruction of Christianity—the doctrines of creation ex nihilo and the incarnation—I explore how the coupling of transcendence and immanence in a Heideggerian ontological mode can be enlightened by Spinoza’s philosophy. What takes shape is a profoundly embodied and affective relationality that I argue is the central resource Nancy wishes to expose at the heart of both Christianity and the secular West.

The purpose of this paper is threefold: (1) To show the basic contours of transcendental subjectivity in the later work of Edmund Husserl, especially the Cartesian Meditations and the Crisis, and in the strictly phenomenological work of Michel Henry, especially Material Phenomenology; (2) to highlight Henry’s radical critique of Husserlian intersubjectivity and show that such critique, while valuable in its intention, is ultimately misguided because it neglects the important contribution Husserl’s complicated vocabulary of lifeworld makes to the study of intersubjectivity; and (3) to point toward a phenomenological conception of intersubjective practice we may call the realm of we-synthesis that prioritizes the first-person perspective rooted in empathy, which enables meaningful engagement with the second-person perspective. Working in conjunction with Husserl and Henry on the phenomenological conception of shared life enables the recuperation of the fragile line between subjectivity and intersubjectivity.

What Are Hermeneuts for?
Author: Dennis J. Schmidt

This paper substantiates why Jung’s psychology is still highly relevant for understanding science today. I explore how his methods and insights allow us to come to terms with the phenomenon of scientific discovery. After outlining core Jungian concepts and insights concerning science, I will focus on the relationship between alchemy and modern science. Also, I will highlight Jung’s understanding of scientific research as a practice of the self, directed at individuation (the integration of various aspects of the self into a coherent whole). Finally, I discuss the role of archetypes in the context of discovery of modern science. Whereas archetypal ideas may function as sources of insight and inspiration, the task for researchers is to come to terms with them, instead of being overwhelmed by them. Besides case studies discussed by Jung himself, I also present more recent examples, taken from molecular life sciences research and climate change research.

This paper takes Jung’s essay ‘Ulysses’ as a case study in order to elucidate his opinion on the relationship between modern artists and mental insanity. The study seeks to contradict a common misconception that Jung ‘diagnoses’ modern artists such as Pablo Picasso and James Joyce with schizophrenia; instead, the paper sheds light on the cultural (not pathological) connections he makes between modern artists and art. The study examines Jung’s writings on modern art and aesthetics, aiming to dismantle some misinterpretations that might make his attitude toward them appear to be a diagnostic one. Above all, I suggest that through his reading of Ulysses, Jung shows how the feelings of confusion that arose in him can actually be reconstructive; this leads to what I would dub a ‘psychic synthesis’ through modern art. Finally, after clarifying Jung’s standpoint on modern art and insanity, this paper seeks to significantly contribute a revaluation of Jung on modernism. 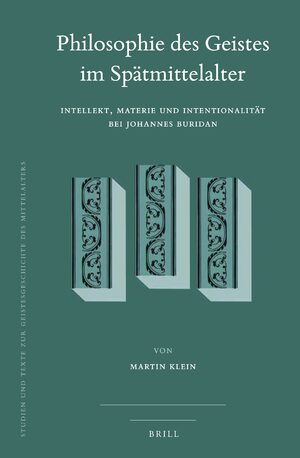 Philosophie des Geistes im Spätmittelalter
Intellekt, Materie und Intentionalität bei Johannes Buridan
Series: Studien und Texte zur Geistesgeschichte des Mittelalters, Volume: 124
Author: Martin Klein
Is the human intellect material? Or can we show by appeal to its intentional operations, such as universal cognition and self-knowledge, that it is immaterial? Is there therefore a connection between intentionality and immateriality?
In Philosophie des Geistes im Spätmittelalter, Martin Klein offers a comprehensive account of John Buridan’s philosophy of mind considered in relation to his epistemology, metaphysics and natural philosophy. In light of material that has only recently been edited, Buridan is presented in the context of the late medieval debate about the nature of the human intellect and how this influences its cognitive functioning.
E-Book

The topic of infantile amnesia, or often referred to as one’s earliest childhood memory, has been studied for more than 100 years. Recently, there have been increased efforts to examine cultural differences in earliest childhood memories. The present study recruited participants (N = 242) from Amazon’s Mechanical Turk (MT), referred to as Turkers, who were either from an individualist (United States) or collectivist (India) culture, and compared their earliest recollections. Turkers from India reported earliest recollections that were from a later age, had more social themes, had more unpleasant memories, had more specific memories, and took longer to complete the task compared to Turkers from the United States. These findings suggest that unique cultural differences may be associated with early memories, which may reflect cultural differences in the development of one’s self-concept.

This study examines the cognitive resources underlying the attribution of stigma in substance use and misuse. A cultural model of substance misuse risk was elicited from students at a major U.S. state university. We found a contested cultural model, with some respondents adopting a model of medical risk while others adopted a model of moral failure; agreeing that moral failure primarily defined risk led to greater attribution of stigma. Here we incorporate general beliefs about moral decision-making, assessed through Moral Foundations Theory. Specifically, we examined commitment to each moral foundation in relation to stigma attribution while controlling for the specific model of substance misuse risk. We found an interaction between the purity moral foundation and the cultural model of risk. This suggests that broad moral orientations, along with more specific understandings of substance misuse risk, combine to orient an individual with respect to stigma attribution.