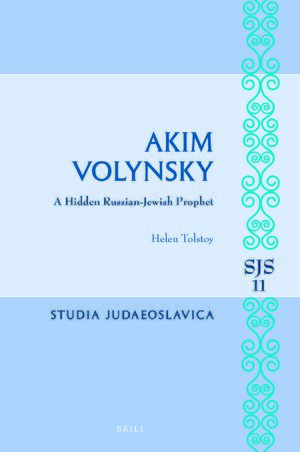 Akim Volynsky
A Hidden Russian-Jewish Prophet
Series: Studia Judaeoslavica, Volume: 11
Author: Helen Tolstoy
In Akim Volynsky: A Hidden Russian-Jewish Prophet Helen Tolstoy goes far beyond the accepted image of Akim Volynsky as a controversial literary critic of the 1890s who ran the first journal of Russian Symbolists, promoted philosophic idealism and proposed the first modernist reading of Dostoevsky. This book, through the study of periodicals and archive materials, offers a new view of Volynsky as a champion of Symbolist theater, supporter of Jewish playwrights, an ardent partisan of Habima theater and finally, a theoretician of Jewish theater. Throughout his life, Volynsky was a seeker of a Jewish-Christian synthesis, both religious and moral. His grand universalist view made him the first to see the true value of leading Russian writers – his contemporaries Tolstoy and Dostoevsky.
E-Book