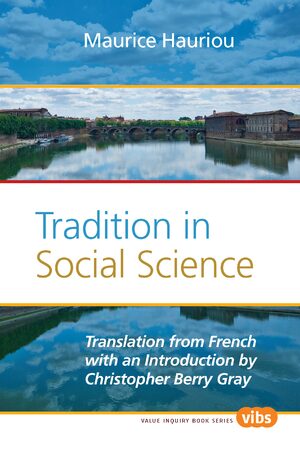 Tradition in Social Science
Series: Value Inquiry Book Series, Volume: 236and Studies in Jurisprudence, Volume: 236
Author: Maurice Hauriou
Tradition in Social Science is the social philosophy written early in life by the jurisprudent who became the preeminent public law jurist in France in the first quarter of the twentieth century, Maurice Hauriou. His work remains prominent in theorizing European Community as well as in Latin American jurisprudence. His studies concern three areas of research: legal theory, social science, and philosophy. In this book Hauriou first focuses on the object and method of the social sciences in a preliminary chapter. The main text is devoted first to a philosophy of history that uses the growth objectively in fraternity, liberty and equality as the criterion for progress; and next to the subjective elements of progress, namely, the recognition of a “pessimistic individualism” in which failure in conduct is to be expected, but is rectified by social institutions. This part closes with the dynamizing of his philosophy of history by evolution and alternation between two phases of social development, namely, middle ages and renaissances. The second part is the philosophy of social science built around social matter, where the dynamic of imitation is the motive force, and three social networks—positive, religious, and metaphysical—specify its consequences. The last of these, the political fabric, is provided with a final chapter of its own. The main doctrinal device that Hauriou developed for use in law was his theory of the institution; this is developed for the first time in the present work.
E-Book

Marxism and Communism
Posthumous Reflections on Politics, Society, and Law
Series: Poznań Studies in the Philosophy of the Sciences and the Humanities, Volume: 36
Editor: Martin Krygier
Hardback