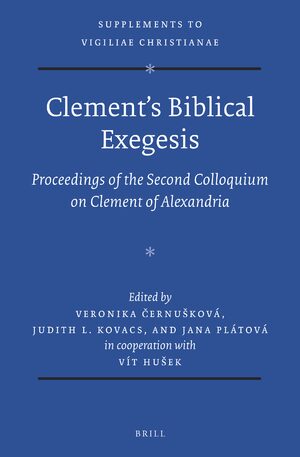 Clement’s Biblical Exegesis
Proceedings of the Second Colloquium on Clement of Alexandria (Olomouc, May 29–31, 2014)
Series: Vigiliae Christianae, Supplements, Volume: 139
Editors: Veronika Černušková, Judith L. Kovacs and Jana Plátová
In Clement’s Biblical Exegesis scholars from six countries explore various facets of Clement of Alexandria’s hermeneutical theory and his exegetical practice. Although research on Clement has tended to emphasize his use of philosophical sources, Clement was important not only as a Christian philosopher, but also as a pioneer Christian exegete. His works constitute a crucial link in the tradition of Alexandrian exegesis, but his biblical exegesis has received much less attention than that of Philo or Origen. Topics discussed include how Clement’s methods of allegorical interpretation compare with those of Philo, Origen, and pagan exegetes of Homer, and his readings of particular texts such as Proverbs, the Sermon on the Mount, John 1, 1 John, and the Pauline letters.
E-Book