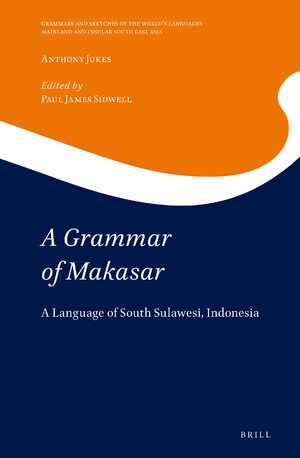 A Grammar of Makasar
A Language of South Sulawesi, Indonesia
Series: Grammars and Sketches of the World's Languages, Volume: 10and Mainland and Insular South East Asia, Volume: 10
Editor: Paul James Sidwell
Author: Anthony Jukes
The book is a grammar of the Makasar language, spoken by about 2 million people in South Sulawesi, Indonesia. Makasarese is a head–marking language which marks arguments on the predicate with a system of pronominal clitics, following an ergative/absolutive pattern. Full noun phrases are relatively free in order, while pre-predicate focus position which is widely used. The phonology is notable for the large number of geminate and pre–glottalised consonant sequences, while the morphology is characterised by highly productive affixation and pervasive encliticisation of pronominal and aspectual elements. The work draws heavily on literary sources reaching back more than three centuries; this tradition includes two Indic based scripts, a system based on Arabic, and various Romanised conventions.
E-Book

Cambodia’s Muslims and the Malay World
Malay Language, Jawi Script, and Islamic Factionalism from the 19th Century to the Present
Series: Brill's Southeast Asian Library, Volume: 7
Author: Philipp Bruckmayr
In this monograph Philipp Bruckmayr examines the development of Cambodia’s Muslim minority from the mid-19th to the 21st century. During this period Cambodia’s Cham and Chvea Muslims established strong relationships with Malay centers of Islamic learning in Patani, Kelantan and Mecca. During the 1970s to the early 1990s these longstanding relationships came to a sudden halt due to civil war and the systematic Khmer Rouge repression. Since the 1990s ties to the Malay world have been revived and new Islamic currents, including Salafism and Tablighism, have left their mark on contemporary Cambodian Islam. Bruckmayr traces how these dynamics resulted inter alia in a history of local Islamic factionalism, culminating in the eventual state recognition of two separate Islamic congregations in the late 1990s.
E-Book 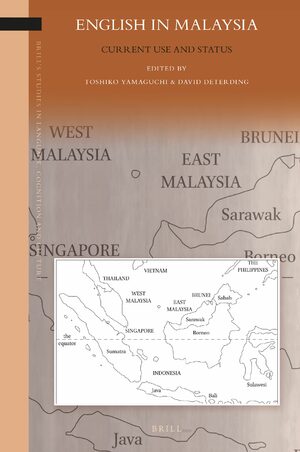 English in Malaysia
Current Use and Status
Series: Brill's Studies in Language, Cognition and Culture, Volume: 14
Editors: Toshiko Yamaguchi and David Deterding
English in Malaysia: Current Use and Status offers an account of the English language used in present-day West and East Malaysia and its status anchored in different linguistic, social and educational domains. After an Introduction giving a bird’s eye view of the status of English in Malaysia, the eight main chapters offer case studies revolving around four themes:
i. linguistic features, with special focus on pronunciation and language contact;
ii. language attitudes;
iii. English in on-line discourse; and
iv. English and language policies.

The chapters cover original data and topics, seeking to draw an accurate portrait of Malaysian English, a non-native variety of postcolonial English that is currently developing its pronunciation, grammar, lexis and distinct identity.
E-Book

10 A Prognosis for the Future
Authors: David Deterding and Toshiko Yamaguchi

4 How do We Stress? Lexical Stress in Malaysian and British English
Author: Rachel Siew Kuang Tan

6 English for the Indigenous People of Sarawak: Focus on the Bidayuhs
Authors: Patricia Nora Riget and Xiaomei Wang