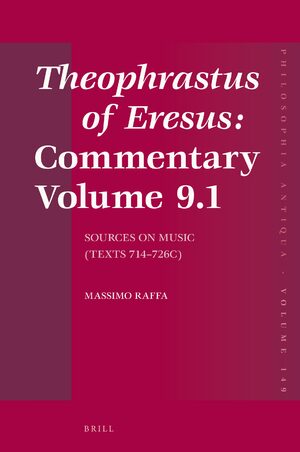 Theophrastus of Eresus: Commentary Volume 9.1
Sources on Music (Texts 714–726C)
Series: Philosophia Antiqua, Volume: 149and Theophrastus of Eresus, Volume: 149
Author: Massimo Raffa
Among the many subjects on which Theophrastus wrote, music is one of the most fascinating, as is testified by the sources discussed in this volume. Although scanty, the material we have—sixteen texts altogether, most of which are indirect testimonies—gives an idea of the originality and modernity of Theophrastus’ thought on music, and makes us regret that we do not know more. Our philosopher conceives of music as something that originates from a movement in the soul caused by passions and comes into existence through the body. Accordingly, he is interested in performance—i.e. the way in which musical expression is brought to the listener—and its effects on the soul and the body—e.g. musical therapy.
E-Book 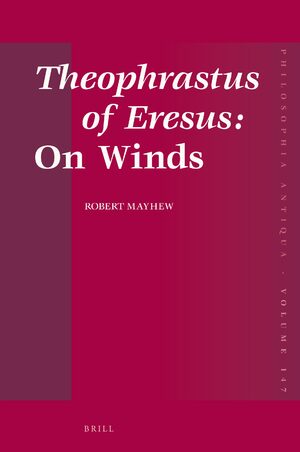 Theophrastus of Eresus: On Winds
Series: Philosophia Antiqua, Volume: 147and Theophrastus of Eresus, Volume: 147
Author: Robert Mayhew
In Theophrastus of Eresus: On Winds, Robert Mayhew provides a critical edition of the Greek text with English translation and commentary on the sole Peripatetic treatise devoted specifically to winds, by Aristotle’s successor in the Lyceum. This is the first edition of this text to appear in over forty years, and the first ever to make use not only of the twelve medieval manuscripts but also of the Oxyrhynchus papyrus fragment of this work (first published in 1986). The lengthy commentary attempts to explain this difficult (and often corrupt) text and its relationship to Aristotle’s meteorological theory and scientific methodology.
E-Book 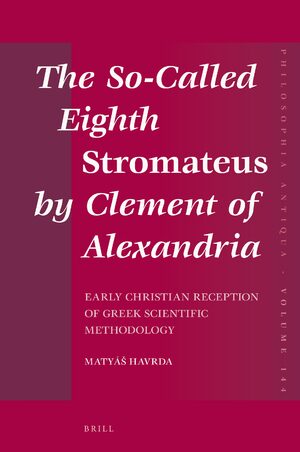 The So-Called Eighth Stromateus by Clement of Alexandria
Early Christian reception of Greek scientific methodology
Series: Philosophia Antiqua, Volume: 144
Author: Matyáš Havrda
The so-called eighth Stromateus (‘liber logicus’) by Clement of Alexandria (d. before 221 C.E.) is an understudied source for ancient philosophy, particularly the tradition of the Aristotelian methodology of science, scepticism, and the theories of causation. A series of capitula dealing with inquiry and demonstration, it bears but few traces of Christian interests.

In this volume, Matyáš Havrda provides a new edition, translation, and lemmatic commentary of the text. The vexing question of the origin of this material and its place within Clement’s oeuvre is also addressed. Defending the view of ‘liber logicus’ as a collection of excerpts made or adopted by Clement for his own (apologetic and exegetical) use, Havrda argues that its source could be Galen’s lost treatise On Demonstration. 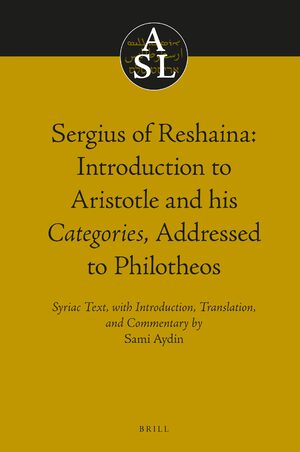 Sergius of Reshaina: Introduction to Aristotle and his Categories, Addressed to Philotheos
Series: Aristoteles Semitico-Latinus, Volume: 24
Author: Sami Aydin
The physician and commentator Sergius of Reshaina (d. 536) composed two related texts in Syriac about the philosophy of Aristotle, chiefly dealing with themes discussed by Aristotle in his Categories, but also with his teaching on space as found in the Physics. This book presents a critical edition and English translation of the shorter of these texts. A survey of Sergius’ life and works is given in the introduction and the intellectual context of his education in Alexandria is outlined, with focus on the medical and philosophical curricula of the Alexandrian school. Sergius’ line of thought is clarified and his text is compared to Greek commentaries on the Categories that also present the teaching of his Neoplatonist master Ammonius Hermeiou.
E-Book 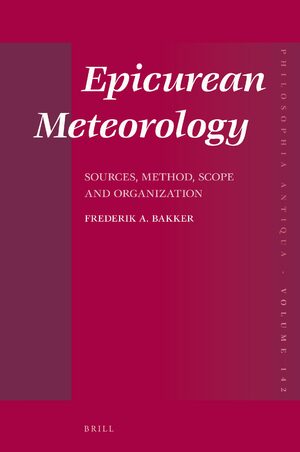 Epicurean Meteorology
Sources, Method, Scope and Organization
Series: Philosophia Antiqua, Volume: 142
Author: Fredericus Antonius Bakker
In Epicurean Meteorology Frederik Bakker discusses the meteorology as laid out by Epicurus (341-270 BCE) and Lucretius (1st century BCE). Although in scope and organization their ideas are clearly rooted in the Peripatetic tradition, their meteorology sets itself apart from this tradition by its systematic use of multiple explanations and its sole reliance on sensory evidence as opposed to mathematics and other axiomatic principles.
Through a thorough investigation of the available evidence Bakker offers an updated and qualified account of Epicurean meteorology, arguing against Theophrastus’ authorship of the Syriac meteorology, highlighting the originality of Lucretius’ treatment of mirabilia, and refuting the oft-repeated claim that the Epicureans held the earth to be flat. 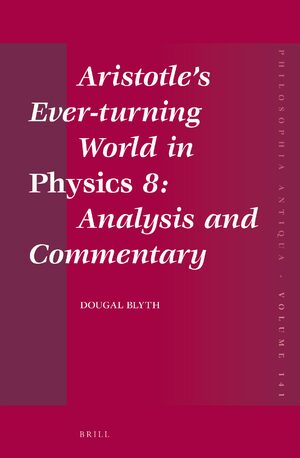 Aristotle’s Ever-turning World in Physics 8: Analysis and Commentary
Series: Philosophia Antiqua, Volume: 141
Author: Dougal Blyth
In Aristotle’s Ever-turning World in Physics 8 Dougal Blyth analyses, passage by passage, Aristotle’s reasoning in his explanation of cosmic movement, and provides a detailed evaluation of ancient and modern commentary on this centrally influential text in the history of ancient and medieval philosophy and science. In Physics 8 Aristotle argues for the everlastingness of the world, and explains this as deriving from a single first moved body, the sphere of the stars whose rotation around the earth is caused by an immaterial prime mover.

Blyth’s explanation of Aristotle’s individual arguments, techniques of reasoning and overall strategy in Physics 8 aims to bring understanding of his method, doctrines and achievements in natural philosophy to a new level of clarity. 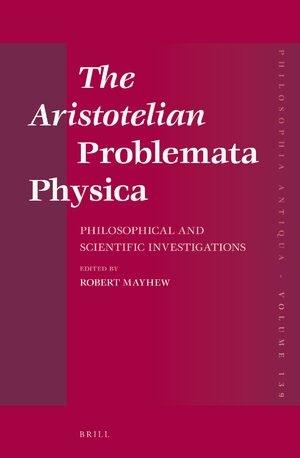 The Aristotelian Problemata Physica
Philosophical and Scientific Investigations
Series: Philosophia Antiqua, Volume: 139
Editor: Robert Mayhew
The Problemata physica is the third longest work in the corpus Aristotelicum, but among the least studied. It consists of 38 books, over 900 chapters, covering a vast range of subjects, including medicine and music, sex and salt water, fatigue and fruit, animals and astronomy, moderation and malodorous things, wind and wine, bruises and barley, voice and virtue. Aristotelian Problemata Physica : Philosophical and Scientific Investigations consists of 21 essays by scholars of ancient Greek philosophy and science. These essays shed light on this mysterious work, providing insights into the nature of philosophical and scientific inquiry in the Lyceum during Aristotle’s life and especially in the years following his death.
E-Book