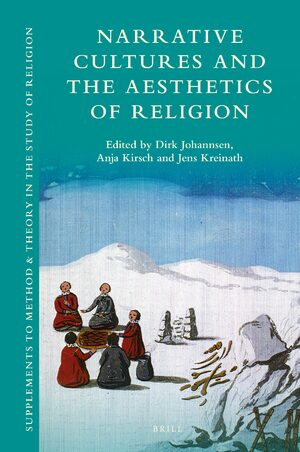 Narrative Cultures and the Aesthetics of Religion
Series: Supplements to Method & Theory in the Study of Religion, Volume: 14
Editors: Dirk Johannsen, Anja Kirsch and Jens Kreinath
Narrative Cultures and the Aesthetics of Religion presents the aesthetics of narrativity in religious contexts by approaching narrative acts as situated modes of engaging with reality, equally shaped by the immersive character of the stories told and the sensory qualities of their performances. Introducing narrative cultures as an integrative framework of analysis, the volume builds a bridge between classical content-based approaches to narrative sources and the aesthetic study of religions as constituted by sensory and mediated practices. Studying stories in conjunction with the role that performative acts of storytelling play in the cultivation of the senses, the contributors explore the efficacy of storytelling formats in narrative cultures from ancient times until today, in regions and cultures across the globe.
E-Book

In this chapter, Laack analyzes a migration account visually depicted in the Mexican early colonial pictorial manuscript known as the Mapa de Cuauhtinchan No. 2. This pictographic map tells the story of a group of Aztecs leaving their primordial home, changing their social, cultural, and religious identity through migration and the passing of ordeals, and finally settling in the town of Cuauhtinchan. It is painted in the style of Aztec pictography, which used visual imagery to convey thoughts and meanings in contrast to alphabetical scripts using abstract signs for linguistic sounds. Drawing on the theories of embodied metaphors and embodied meaning by philosopher Mark L. Johnson and cognitive linguist George P. Lakoff, I argue that Aztec pictography offers efficient and effective means to communicate embodied metaphors on a visual level and evokes complex layers of embodied meaning. In doing so, I intend to change perspective on the narrative powers of religious stories by transcending textual patterns of analysis and theory building and opening up to non-linguistic modes of experience and their influence on narrative structures and strategies.

The chapter studies how biblical narratives were integrated into the lives and practices of Egyptian monastics in Late Antiquity and how the monastics immersed themselves in the biblical storyworld. In what ways did the reception and appropriation of Scripture take place? How were biblical narratives internalized and embodied? What types of sensory and mediated practices contributed to transform the monastics from secular persons to Christian ideals? Ascetic life implied to live with a strict disciplinary regime with restrictions on food, clothing, sleep, and sexuality. These aspects have been studied heavily in recent years. But the ascetic regime of Egyptian monasteries and desert cells also included braiding rushes and weaving baskets on a daily basis. How were braiding and weaving integrated with the monastic narrative culture based on Scripture? In what ways did these activities contribute to induce bodily sensation, changed moods, and scriptural-based imaginaries in the minds of the ancient monastics? The chapter presents the biblical narrative culture of ancient Egyptian monasteries; it illuminates the aesthetic formation of the monastics and contributes to an explanation of the special role played by their work on rushes, baskets, wool, and mats. It discusses the transformative spaces of assemblies and monastic cells; and finally, it analyzes the monastics’ processual approach to work and the interaction between the tangible aesthetics of economy and the aesthetics of spiritual immersion.

This chapter develops strategies for analyzing the role of emotions in religious narratives as a form of cultural analysis and discusses how this contributes to understanding narrative cultures. It presents a transferable, narratologically-based method for analysis of the narrative treatment of emotions, and it discusses which roles emotions play in the narrative imagination of the ancient Mesopotamian deity, Ninurta. The strategy of analysis for analyzing emotions narratologically presented here includes analyzing 1) verbalized emotions, 2) emotional story effects, and 3) the overall levels of stimulation of emotions across a narrative or a set of narratives. Examples are drawn from Old-Babylonian, Sumerian Ninurta compositions and contextualized within Mesopotamian narrative cultures. The aesthetic perspective on emotions and narrative allows us to investigate religious stories in a way that does not over-determine which response is or should be elicited, but investigates how the narratives—and religious narrative cultures—cultivate different emotional responses. The article suggests avenues for analyses of how religious narratives move religious participants, how they make the superhuman characters engaging and relevant, and how they cultivate sensibilities and emotional norms and practices.

Chapter 11 Foundational Narratives in Chan/Zen Buddhism and the Observation of the Ineffable: Two “Public Cases” (gong’an/kōan) of the Gateless Barrier of Chan Lineage
Author: Martin Lehnert

As a central element of Chan Buddhist storytelling, narratives of transmission tend to focus on the emergence and development of Chan lineage formation (Ch. Chanzong, Jap. Zenshū). Within this context, gong’an/kōan narratives give expression to specific temporal, cognitive, and sensory aspects of the particular act of the “transmission of the dharma.” If read in direct comparison, two prominent gong’an/kōan narratives about (1) the foundation of Chan tradition and (2) its transmission to China display particular features of emplotment, which counteract the linearization of oral storytelling by exposing an eidetic and paratactic taking place of the “ineffable” as something “obvious.” Under such hermeneutical preconditions, the theoretical concept of narrative culture refers no longer to a primacy of linear oral narration or to any sort of teleological master narrative. Instead, a mode of perception becomes apparent, which avoids domains of linguistic representation based on lineal and introspective description.

Chapter 3 How to Sense a Ghost: On the Aesthetics of Legend Traditions
Author: Dirk Johannsen

In this chapter, Johannsen suggests reading legend traditions as a sensory practice suited to augment reality with elements of a mythical storyworld. Legends are both descriptive and prescriptive, and the analyses of their social functions have long dominated folkloristic research. Their functional use, however, is always mediated: Narrative scripts develop their social potential in that they translate into aesthetic scripts that play a crucial role in the cultivation of the senses. Proceeding from an argument on the experientiality of legend traditions made by Lauri Honko, the contribution connects the perspective of the aesthetics of religion to the cognitive framework of predictive processing. From a predictive processing perspective, aesthetic scripts are suited to alter perceptions by micro-managing the recipient’s attention economy. The approach allows for new readings of folkloristic sources, contextualizing them in narrative cultures that constitute dynamic “regimes of attention.”

Chapter 10 Immersing in the World of Radha and Krishna: Visual Storytelling in the Context of Religious Practice
Author: Caroline Widmer

Narration is not limited to textual formats, but is equally present in the performative or fine arts. However, the connection and relationship between narrative content and artistic expression have often been of minor interest. In philological studies, it is still common to consider paintings merely as illustrative accompaniment to the text, whereas for art historians, one of literature’s benefit lies in the possibility of identifying obscure, vague, or indistinct imagery. Addressing the resulting research gap, this chapter explores the imaginative practice related to the interplay of visual and textual storytelling in a religious context. Considering the multiple cognitive effects and worldmaking qualities of fiction, as well as the religious content of Indian art and many Indian stories, attending or practicing religious storytelling can also be interpreted as a religious practice. Referring to a painted series of the Gitagovinda, a religious poem dating back to the twelfth century AD on the love between the Hindu god Krishna and the shepherd girl Radha, artistic methods of transmitting narrative devices and conveying emotions are revealed. The immersive and imaginative impact of paintings and text are also associated with the bhakti movement.