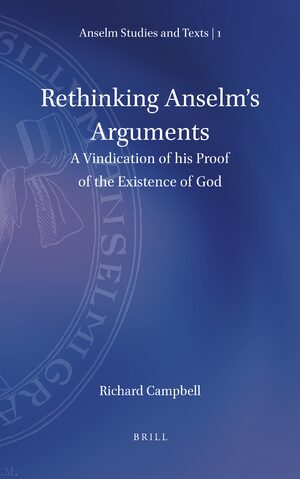 Rethinking Anselm's Arguments
A Vindication of his Proof of the Existence of God
Series: Anselm Studies and Texts, Volume: 1
Author: Richard Campbell
This book re-examines Anselm’s famous arguments for the existence of God in his Proslogion, and in his Reply. It demonstrates how he validly deduces from plausible premises that God so truly exists that He could not be thought not to exist. Most commentators, ancient and modern, wrongly located his argument in a passage which is not about God at all. It becomes evident that, consequently, much contemporary criticism is based on misreading and misunderstanding his text. It reconstructs his reasoning through three distinct but logically connected stages. It shows that, even if Anselm’s crucial premises are sceptically interpreted, his conclusions still follow. Properly understood, this argument is not vulnerable to the standard criticisms, including Gaunilo’s ‘Lost island’ counter-example.
E-Book