Clear All
Download Citations
Page:12
Behind the Scenes: A Review of Western Figure s’ Supportive Comments regarding the Qur’ān
Author: Majid Daneshgar

Numerous supportive affirmations from non-Muslim scholars appeal to a great number of Muslims who endeavor to validate the Qur’ān’s sanctity as well as inimitability. This essay investigates the motives behind why various westerners or Europeans discuss the Qur’ān and Islam in such supportive manner, and how Muslims have interpreted those comments. 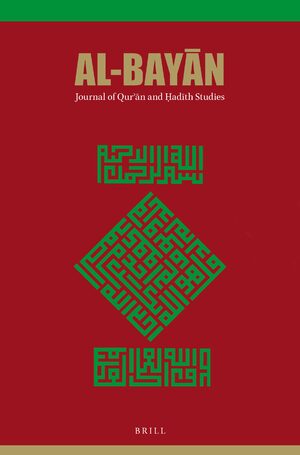 A good deal of recent scholarship on the Qur’ān has focused on the structure of the sūrahs, arguing that there is a coherence to be seen therein. That sense of coherence is found in different bases: contextual flow, theme and content, language and style, and structure. The question is asked as to why this has become such a dominant mode of analysis. Trends in biblical studies and general literary theory are considered as prompting this greater attentions to the aesthetics of texts. It is suggested that this approach to the Qur’ān then reflects contemporary ideas and that it is important not to view such approaches to coherence as “proving” the point: there are other possible approaches to reading the Qur’ān.

Continuity, Context, and Coherence in the Qur’ān : A Brief Review of the Idea of Naẓm in Tafsīr Literature
Author: Mustansir Mir

This paper looks at several works of tafsīr that identify naẓm, or coherence, as a significant feature of the Qur’ān. The authors whose works are examined are Ṭabarī, Rāzī, Biqā‘ī, and Farāhī and Iṣlāḥī—the last two, teacher and student, discussed together. It is concluded that modern tafsīr, compared with traditional tafsīr, is more accepting of the idea of naẓm in the Qur’ān, and that the Farāhī-Islāḥī view of Qur’anic naẓm is more plausible than the views of the other exegetes studied.

English Translations of the Qur’an and the Roles of Why, By Whom, For Whom and How
Author: Davut W. S. Peachy

The translation of a literary work from its original language to another requires not only great skill in both languages, but great knowledge of their literatures and cultures as well. A scripture, particularly the Qur’ān, presents another, higher level of difficulty. Muslims hold that the Qur’ān in any other language than the original Arabic is not the Qur’ān. Some scholars oppose Qur’anic translation per se. Others believe it is an integral part of the Prophet Muhammad’s command to convey the Qur’anic message. Although Muslim translators understand their translations are not the Qur’ān, this is why they must strive to transmit the message of the Qur’ān to the best of their skills through their translations. Hundreds of editions have appeared in various languages, with the majority in English. By whom can the Qur’ān be translated? A translator assumes he is the most qualified, skillful and dedicated in communicating with his target audience. They are the all-important ones for whom he must tailor his work. Once he has settled why, by whom and for whom, he can proceed to how. What style can he best use to reach his audience with the Qur’anic Message? What range of diction and level of discourse will he employ to bring his efforts into the cultural and social context of his readers? Can Islamic and Arabic terminology be conveyed without lengthy footnotes and commentary? The translator is responsible for making many difficult and crucial decisions which will affect the accuracy, clarity and acceptability of his work.

The Qur’ān is Islam’s Holy Book and has been available to non-Muslim interpreters since the 8th century. Three negative interpretative paradigms derived from John of Damascus (676- 749), Nicholas of Cusa (1401-1464) and Martin Luther (1483-1546) continue to inform many Christians about the Qur’ān and shape many Western views of Islam and attitudes toward Muslims. Other Christians have offered some basic insights about the Qur’ān through too brief comments prefacing translations of the Qur’ān or explicating Qur’anic themes. Others have written about the Qur’ān yet introduced questionable judgments about it and Islam generally. Today, it is essential for Christians to interpret the Qur’ān to non-Muslims without Orientalist biases. Efforts such as those by Miroslav Volf (Allah: A Christian Response, 2011) and my Opening the Qur’an (2008) point toward developing a comprehensive hermeneutical perspective. In the paper I propose a methodological approach derived from my teaching experience with largely Christian and secularized undergraduate and graduate school students in the United States of America. Part One sets the interpretative contexts in the United States. A proposed methodology in four steps constitutes Part Two. I adapt insights from Muslim scholars such as Farid Esack, Fazlur Rahman, Ingrid Mattson, and Mahmoud Ayub. Part III proposes that Muslim and non- Muslim scholars may employ cyberspace technology to continue fruitful discussions about our respective scriptures.

Qur’Anic and Biblical Prophets: Are They Really the Same People?
Author: Oliver Leaman

It is a familiar Islamic doctrine that the prophets in the Jewish and Christian bibles are the same as those with the same name in the Qur’ān. They sometimes appear to be different since the bibles are not always accurate in their representation of the divine message to humanity. It could also be argued that if the prophets appear to be very different in the bibles from the prophets in the Qur’ān, then perhaps they are really not the same people. Sometimes the bibles are regarded as offering a corrupted view of the truth about the prophets and sometimes a less complete picture of them, which would explain the differences that are easy to detect. On the other hand, an argument is required to show that an apparent identity problem is only apparent, and we do not find one in the text of the Qur’ān itself.

This article examines the Qur’anic concept of the Qiwāmah in light of the interpretive articulations of modern Muslim women exegetes. It starts with a theoretical foundation that seeks to highlight the need for the Qur’āno-reasoned approach proposed by Muslim scholars such as Fazlur Rahman, Muhammad ‘Abid al-Jabiri, and Mohamed Arkoun. It argues that the interpretations of “canonical female exegetes” like Fawkiyah Sherbini and Fatma Kariman Hamzah of the issue of qiwāmah have to be reconsidered not only in view of the socio-historical and hermeneutical methods proposed by former scholars, but also with regards to the Qur’anic inimitable and unceasing functionality within various socio-cultural, economic and political contexts. More significantly, the work sheds light on the intra-Islamic feminist debate between these canonical women scholars and those of “unorthodox” female interpreters such as Amina Wadud and Asma Barlas. Hereby, I enquire about serious matters that stand at the core of these controversies, among which religious “authority” and “legitimacy”. Moreover, the article links these thorny terminologies to the American feminist theologian Mary Daly’s concept of “methodolatry,” as well as endeavors to see whether the latter could fit into an intra-Islamic framework.