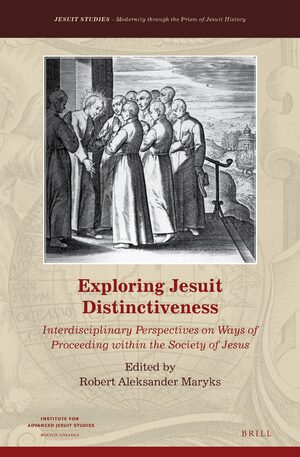 Exploring Jesuit Distinctiveness
Interdisciplinary Perspectives on Ways of Proceeding within the Society of Jesus
Series: Jesuit Studies, Volume: 6
Editor: Robert Aleksander Maryks
The volume theme is the distinctiveness of Jesuits and their ministries that was discussed at the first International Symposium on Jesuit Studies held at Boston College’s Institute for Advanced Jesuit Studies in June 2015. It explores the quidditas Jesuitica, or the specifically Jesuit way(s) of proceeding in which Jesuits and their colleagues operated from historical, geographical, social, and cultural perspectives. The collection poses a question whether there was an essential core of distinctive elements that characterized the way in which Jesuits lived their religious vocation and conducted their various works and how these ways of proceeding were lived out in the various epochs and cultures in which Jesuits worked over four and a half centuries; what changed and adapted itself to different times and situations, and what remained constant, transcending time and place, infusing the apostolic works and lives of Jesuits with the charism at the source of the Society of Jesus’s foundation and development.

Thanks to generous support of the Institute for Advanced Jesuit Studies at Boston College, this volume is available in Open Access.
E-Book